Last night before I went to bed, I snuck in a little late-night snack as I was watching Revenge. 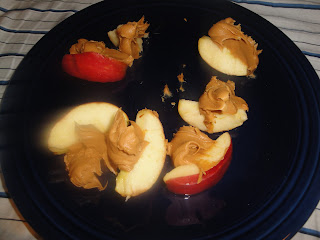 That is one of my all time favorite snacks, I absolutely love peanut butter but the apples add just a hint of sweetness into one of my favorite tastes!

As I mentioned, I was watching Revenge while I ate my snack. I love the show Revenge. My friend Megan actually got me completely hooked on it this past fall and I can't stop watching it! It is one of those shows I make time for every week. If you haven't watched it, I highly recommend tracking down the episodes from this season. It is a suspenseful show and I never know what Emily Thorne (aka Amanda) is going to do next!

Speaking of TV shows, this morning I heard on the radio that it was announced yesterday what shows would be renewed for the fall. As we all know, I love my tv. I love to have shows to get caught up on in my spare time. So I spent a few minutes before work this morning looking up which of my shows has been renewed. To see the list click here .

Just to review the shows I have been hooked on this year...(no judgments please! remember I don't get to watch them every week..usually I catch up on them during my days off)

Sundays: Once Upon a Time, Desperate Housewives,  Kardashians (whichever one is on)

So I was VERY VERY bummed to see that Secret Circle did not make the renewal cut. I read a couple of articles on it being cut before writing this blog post. To see what the producers would have done next season click here.

I really thought that I would have a chance to see where all the characters were going next season...but unfortunately that's not the case! The only other show that I had to watch this happen to was October Road a show that I got hooked on while in college. It only lasted a season and a half before it was given the boot. I still own it on DVD though!

So now I no longer will be watching Desperate Housewives, One Tree Hill, or Secret Circle. I'm sad that they are off the air, but this year tv was a little intense for me. I started watching a few shows (PanAm, Playboy Club, and Grimm) and eventually lost interest because there just wasn't enough time in the day! Maybe now I can catch up on my Netflix which has been seriously neglected!

For lunch today I arrived home just as my mom was emptying the car from buying groceries so I was in luck! She had just bought all natural, organic chicken salad! Yum yum yum! 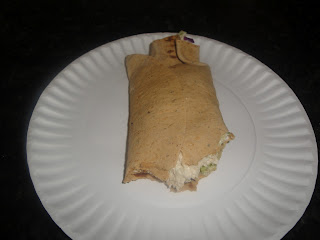 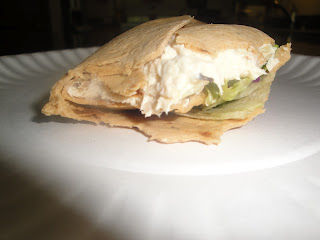 I used the same type of wrap as yesterday but of course took a few bites before I remembered to whip out my camera! It was delicious. I threw in some salad mix too so I could get some vegetables in my lunch and also give my wrap a little crunch to it! =) 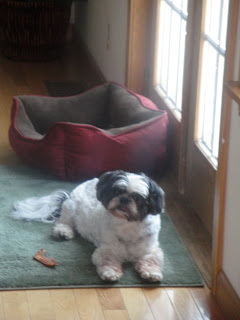