Hey everyone, just thought I would pop in for an extra blog post today, SURPRISE!

I couldn't ignore last nights Bachelorette episode and not say anything about it because boy I was SHOCKED. I had no idea that was going to happen!

If you haven't seen last nights Bachelorette episode then you probably don't want to read on, or just skip over until you see the pictures of Roxy and then you'll know it's safe =)

When I saw the previews leading up to this past episode, I assumed that one of the boys did something stupid, or that Des was having trouble choosing, or maybe her brother butted in on her relationships again. I was so shocked to see that Brooks was the cause of her breakdown. I thought that if anything Desiree wasn't in to him as much as he was in to her, I couldn't believe that she came out and said that she was going to pick him and it was basically over for her at this point.

To me it seems that she was pretty much stringing along the other guys, knowing that she wasn't planning on picking them because she didn't like them as much as she liked Brooks. Now that Des says it's over, we're all left to wonder what will happen next week.

In my opinion, there's not a chance in hell she will pick either Drew or Chris. How could she ever pick one of them after saying over and over again that she loved Brooks and the other guys couldn't compare. What guy would want to be second choice? No man would. At this point I'm thinking that either Brooks will change his mind, come back and compete for Des's heart OR Des will not pick anyone. I don't think she will choose anyone but Brooks, but I'm thinking he might come back and try it again, I just have this feeling! =)

Anyways, that's just my two cents! Now for some pictures of Roxy. The two of us had a photoshoot this afternoon before I left for work. This is just to show you how much of a baby she is and how much she loves being snuggled... 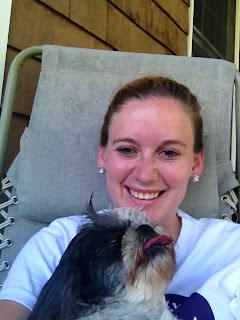 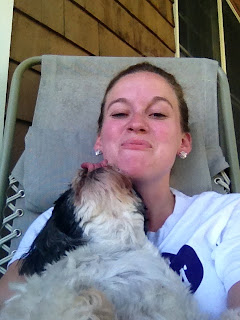 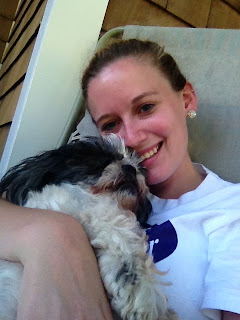 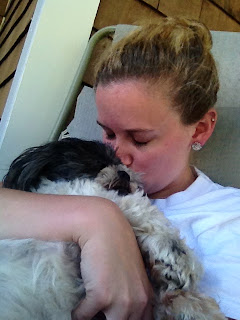 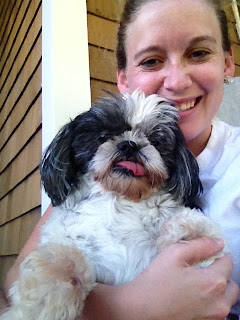 what a goober. Awful pictures of me, but I just had to capture pictures of how she acts when she is in my lap!

Anyways, I'll see you all for my normal morning post tomorrow! Have a great night!