I am exhausted this morning after having a very busy weekend at the Charlestown Seafood Festival. My friend Brittni is in charge of the volunteers for the festival so every year I end up there for almost the entire weekend. It has become a summer tradition and if I'm counting correctly I think that this was my 10th year volunteering!

After work on Friday I headed over to the fairgrounds to do a shift in the beer tent. Working the beer tent is always a blast because it is so busy and the time flies by. I originally wasn't planning on working on Friday night, but when Rachel said she was coming down to volunteer on Friday night only I figured I might as well go too. 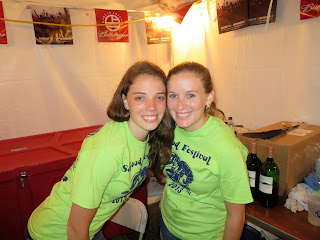 I was glad that I got to see Rachel, but unfortunately we were placed on opposite sides of the tent so we didn't get a chance to talk much. Luckily we have plans to do some bridesmaid shopping in the very near future, which I can't wait for! 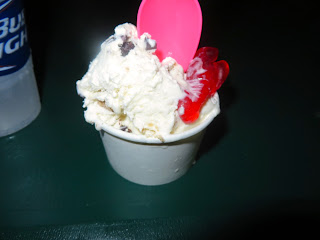 The best part about working at the Seafood Festival is getting free food! Working in the beer tent allows you to barter with people around you. Often times we send beer to a tent nearby in exchange for fries, clamcakes, doughboys, etc. It works out great for everyone! =)

I managed to score some free ice cream from Holy Cow, a local ice cream place located in Ashaway. They had a tent on the grounds and since they were so super nice they gave me a HUGE cup of chocolate chip cookie dough ice cream with a gummy lobster on top. Rachel ate a whole bag of the lobster gummies, which were incredibly delicious.


On Saturday I had to get to the festival around 9 am in order to be in charge of the volunteers while Brittni went to a wedding. I spent a lot of time driving around in a golf cart and it was definitely a great time being in charge. =)

I ended up in the beer tent later that night with some of my old friends, and we were slammed! There was a line halfway across the midway and we didn't stop pouring beer the whole time. We had five people taking orders, four people pouring beer, one person pouring bacardi drinks, and one pouring wine. It was such a busy night! My shift absolutely flew by and I passed out as soon as my head hit the pillow that night. 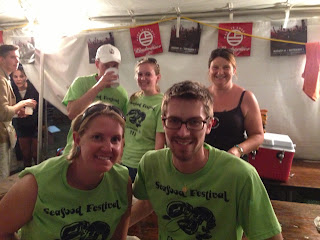 On Sunday I ended up getting to the festival around 5pm and heading into the beer tent shortly afterwards. I was lucky to once again work with some awesome people. This shift didn't go by quite as fast since it was a slower night. 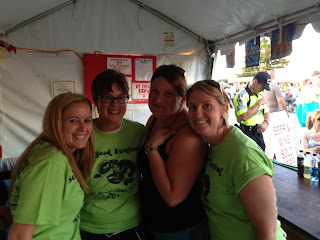 Since we were so close to the stage, we were able to hear the Journey cover band play some awesome music and spent a lot of time singing along to the songs we were able to hear! "Don't stop believin'...." (No, you don't actually want to hear me sing!) 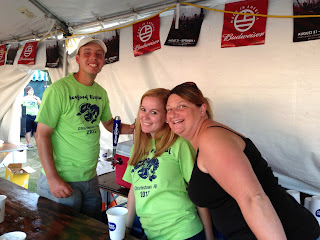 My favorite free food score of the weekend? The 6 doughboys that arrived at our tent before closing time. YUM! This was the third one I took part in devouring this past weekend. I have to say that I am definitely ready to get back to healthy eating today! 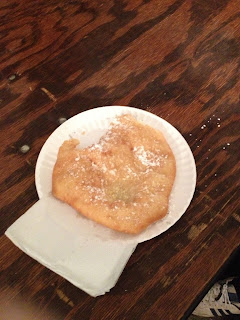 You'll notice that there was not a bit of seafood in this post about the Seafood Festival. I am not a huge fan of seafood at all. I don't care for meat too much, especially when I can see that it clearly came from an animal. I much prefer the "fair-type" food like fries, ice cream, hot dogs, and doughboys. However, I will eat calamari, but it's not my favorite food either,

What festivals have you been to this summer?


Hope you have a great start to your week!
Posted by Melissa at 8:00 AM