I'm going to be backing up to Sunday for this blog post, considering yesterday was a rather dull day =)

For my mom's birthday I bought her tickets to the Goo Goo Dolls/ Matchbox 20 concert for the Comcast Center in Mansfield MA. I gave them to her with the intention that she would take my dad and they would be able to enjoy the concert together. However, on Sunday my dad told me that I would be attending the concert in his place. He hasn't been feeling well lately and is on antibiotics. He also prefers classic rock music and this concert was definitely not his thing (something my mom enjoys a lot more).

I was super excited to be able to go! I saw the Goo Goo Dolls back in 2007 and enjoyed it, but had never seen Matchbox 20. Both of these bands represent my childhood since I am a 90s kid, and I definitely enjoyed every second! 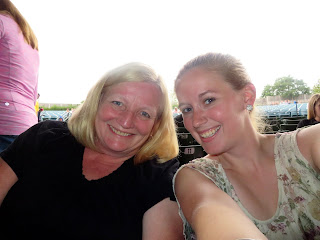 My mom and I arrived at the Comcast Center super early so we could avoid traffic. We ended up hanging out in the parking lot for awhile watching the police search cars and hassle people around us. We ended up going to our seats about 45 minutes before the concert started, but it worked out great since we were under shelter and it started to sprinkle outside. We were thankful I bought tickets far enough forward that we were covered! 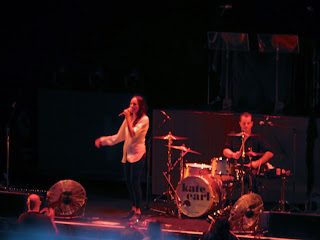 Kate Earl was the opening act, who I had never heard of. She came out on stage in what looked like a cape, but then took it off before I took a picture of her...

She announced that she had performed one of her songs for Desiree and Chris on The Bachelorette this past season! She said that she takes credit for the fact that they are now engaged. I was surprised that she was from The Bachelorette, I never would've guessed that. 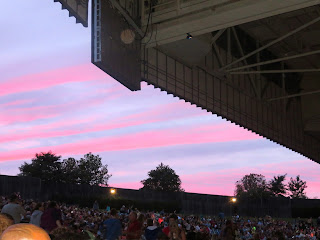 While we waited for the Goo Goo Dolls to start I took a picture of the gorgeous sunset. The pink streaks across the sky were beautiful! 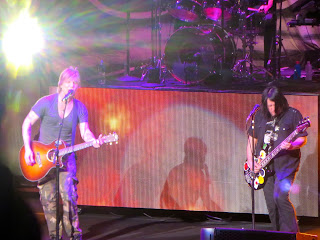 The Goo Goo Dolls were incredible. They sang every popular song that I wanted to hear, and a brand new one that I downloaded right after their set which I loved. It's called "Come To Me" and is one of my new favorites.

The best part about seeing them in concert is that they sound just like they do on the radio or on their cd. There is literally no difference in their voices and sound at all which makes it so familiar and nice to hear in concert. 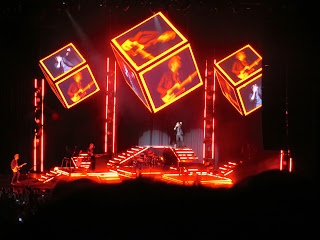 Matchbox 20 was also great, they sang all of their popular songs and quite a few I didn't know as well. I noticed that Rob's voice sounded just like it does on his cd as well which was nice!

I always think that Matchbox 20 and The Goo Goo Dolls have very similar sounds so I found that the concert was nice and mellow which was very nice! 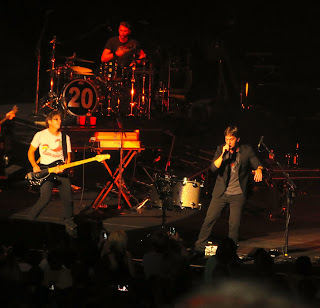 As we enjoyed the concert my mom and I definitely got a kick out of the people around us.... The woman next to my mom watched the entire concert through binoculars. Yes, she stared through them the entire time, smiling creepily...it was weird.

Also there were two people in front of us that were competing for spazz of the year awards. Their dancing was out of control! So my mom and I giggled regularly throughout the concert.


Backing up to earlier on Sunday, my mom and I headed to Kohls to shop a little. I went in wanting to buy a suitcase for France. I always borrow a suitcase from my parents and the one I use is not very sturdy and is getting worn out. I wanted to have my own, nice suitcase! However, I ended up buying a couple other things too... 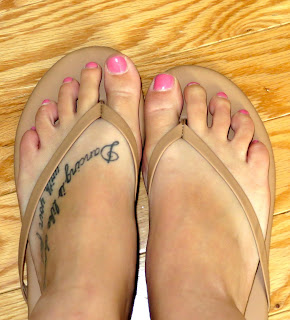 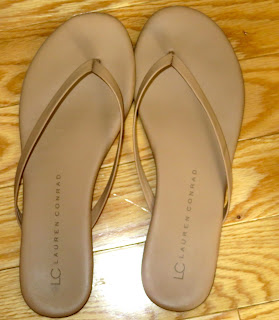 I love my new flipflops from LC Lauren Conrad. I ended up wearing them to the concert and found them extremely comfortable. I usually wear a 7 in shoes, but ended up getting a 6.5 because the 7's felt huge on me! You can find them online here, the color that I have is tan. 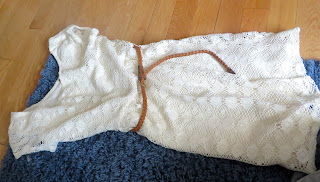 I also bought a dress from Lily Rose and I can't wait to wear it. I am thinking I will also bring it to France with me. You can find it here . 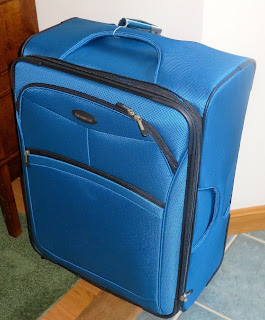 I ended up purchasing a Samsonite suitcase since I know they are great quality. This suitcase is 25" which is the medium size, and part of the LEVIT8 collection. I chose the medium one, figuring it will be perfect for France, and possibly someday I could purchase the bigger one and smaller one and have a complete set. For now though, I only need one suitcase =)

Originally this suitcase is $380, but it was on sale and I ended up getting it for $140! I also had a 20% off my entire purchase coupon, and only ended up spending $150 for everything- an amazing deal if I do say so myself.

I plan on doing a blog post on packing for Europe if that is something everyone is interested in.


Also, don't forget that currently a giveaway is going on, just visit this page to enter!

Have a great day everybody!
Posted by Melissa at 8:00 AM