Well, it is a huge week in this part of Rhode Island, it's the Washington County Fair week.

For as long as I can remember, the fair has been a huge draw to all of our community as well as the tourists looking for something fun to do as a family. It is also extremely busy time to be in town- the traffic is unbelievable...but we'll get back to that later....

I planned on meeting up with a group of friends at the fair around 6 yesterday night. Unfortunately that seemed to be the time that everyone else was going as well! I ended up driving through the parking lot looking for a spot and getting frustrated to the point where I was forced to pull back out of the parking lot and re-enter...it was so crazy and extremely frustrating!

Finally, I was able to find a parking spot and meet up with Blythe, Brittni, Stephen, Jenna, and Chris. The first thing we did after entering the fair was check out all the animals. 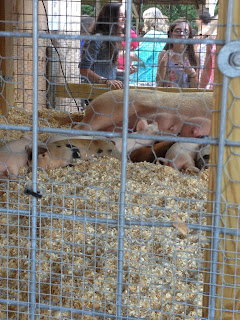 Some of my favorites were the baby pigs! There were seven of them and they were all so adorable.

However, these goats were really cute too! 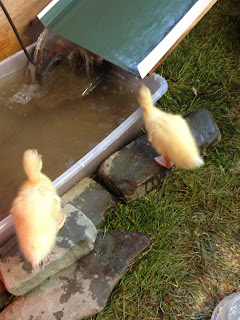 and...of course the ducks! The ducks had a little waterslide to play on, and even though they didn't play on it at all while I watched them, they were still completely adorable!


After checking out all the animals (which also included chickens, roosters, cows, and sheep..) we decided to grab some food. I went all out and ended up eating cheese fries, an ice cream sundae and a doughboy, go big or go home!

We did a loop around the fair, checking out the shops and rides, and ended up in the arts and crafts section where we saw a model of The Back Pearl from the Pirates movies. Of course Brit and I had to jump in for a picture. Back in our college days, we both worked at a local camp and ended up building "The Black Pearl" for our groups to use during a performance on the last day. 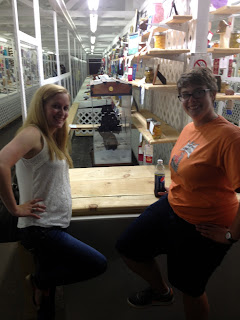 We ended up staying until 10 pm, catching up with other people we saw and watching some of the ongoing events such as the tractor pull. I know, my town is super cool right? You are just wishing while reading this that your town was as cool as mine =)

Now, leaving the fair was absolutely miserable. I was stuck in standstill traffic for over an hour and a half. Apparently there was some sort of accident that was holding traffic up, but in addition to that people were trying to exit out the wrong lane, causing there to be back up since they were forced to merge in with the correct lane closer to the exit. People were getting out of their cars and cutting down ropes and driving in places they didn't belong. I am usually a pretty peaceful driver but man was I heated last night. I was getting cut off left and right and being forced back in the line because of the people who were driving the wrong way.

Anyways, I managed to get home just before midnight, and I have never been happier to get out traffic in my life. Even though it was a sour ending to the night, I did manage to have a wonderful time with friends and am so thankful that we were able to coordinate schedules and get a group together to hang out!

Today has been very quiet, I helped my mom with a big project that I will be blogging about this coming week and now am sitting outside enjoying the cool summer breeze =)

I hope you are all enjoying your weekend and I will be back on Monday with my first ever GIVEAWAY! See you then!
Posted by Melissa at 3:40 PM