Our second day in Paris started off with breakfast at the hotel restaurant. I didn't take any pictures of breakfast but I did eat a chocolate croissant, a bacon sandwich and some potatoes and enjoyed every bite!

After breakfast we had to scurry downstairs to meet up with our tour group and get on the bus for our tour around Paris.

We had a local guide named Sylvie join us for our tour and she was an amazing source of insider information. We went past all the major sites, the Arc de Triumph, the Eiffel Tower, the Champs Elysses, Notre Dame and so many others...

Here are just a few of the hundred pictures I took during the bus tour. 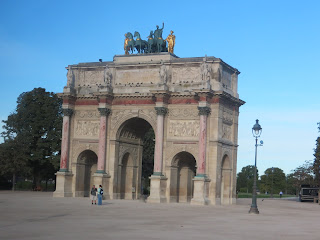 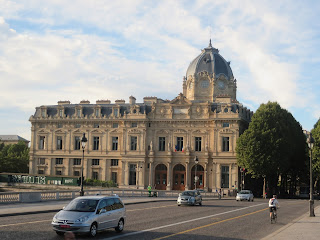 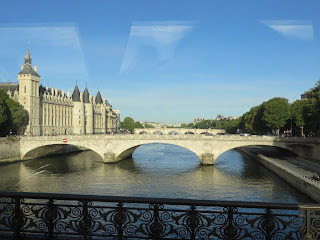 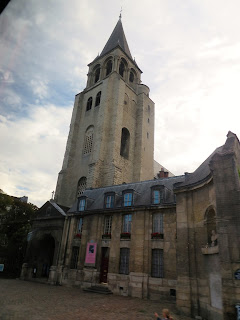 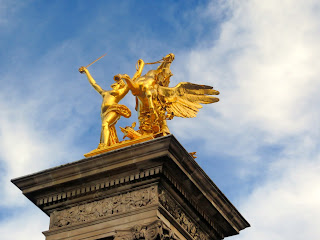 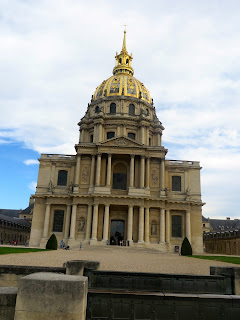 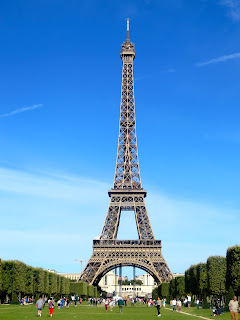 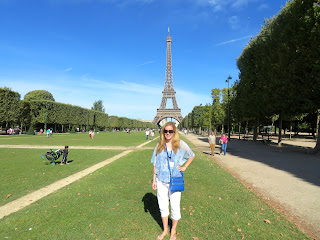 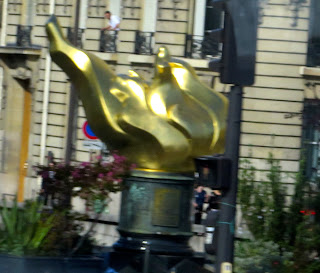 One of the things I was so thankful that Sylvie pointed out is the picture above. The Golden Flame (a golden replica of the one the Statue of Liberty holds) sits above the tunnel where Princess Diana had her life-ending, tragic accident. That was something we didn't expect to see, but managed to catch a glimpse of as we passed by.

After the tour, we made a quick stop for lunch and picked up sandwiches at the mall next door to our hotel. I ended up having a hot dog =)

Then we had a free afternoon and decided to head off on our to Notre Dame and Sainte Chappelle to go inside and explore them a bit further. 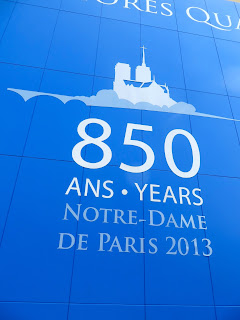 Notre Dame is celebrating 850 years this year which is incredible. The church itself is so much bigger then I imagined it being and you can see it towering over the buildings around it from streets a mile or so away. 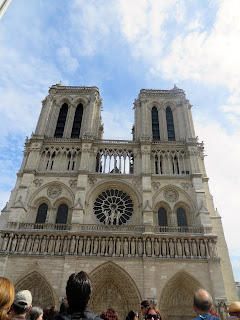 There was quite a long line to enter the church, however it moved fairly quickly and we got in faster then I thought we would.

Once you go inside, it only gets more incredible. There are beautiful stain-glass windows surrounding the church on all sides. There is so much to look at it that it's almost overwhelming. We were lucky enough to be touring during a time when there was a church choir inside rehearsing. It made the entire experience because they sounded as though they were a recording. 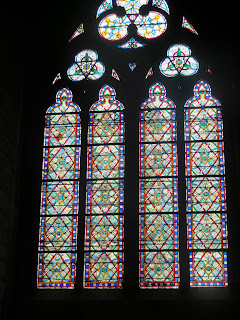 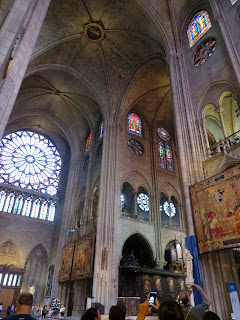 You are allowed to go into the left belltower where Quasimoto supposedly lived, but we didn't venture up there. I regret not going up there a little bit, but what's done is done! 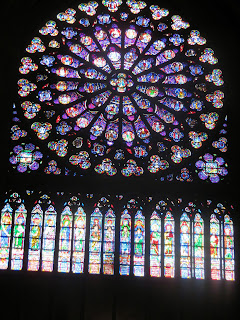 After Notre Dame we decided to visit Sainte Chapelle, a place that my mom had heard you don't want to miss, and everyone who told her that was right... 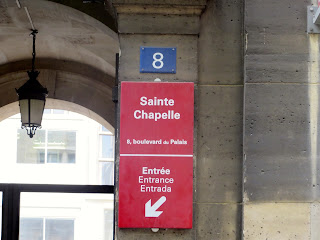 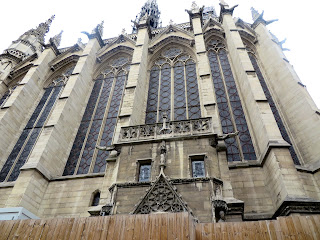 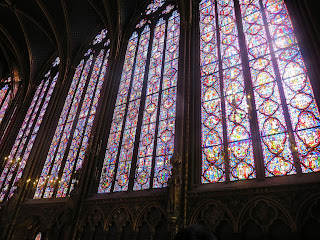 The stained-glass windows were even more beautiful in Sainte Chappelle then they were in Notre Dame. I loved the blue coloring on them and we stood in awe on the second floor just looking at the different windows around the church. 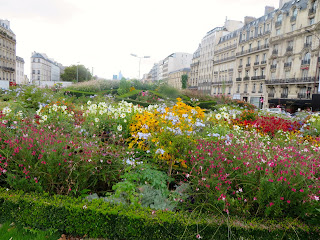 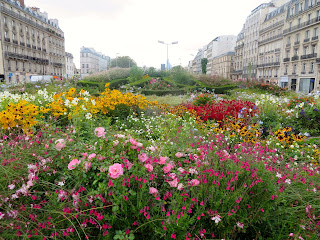 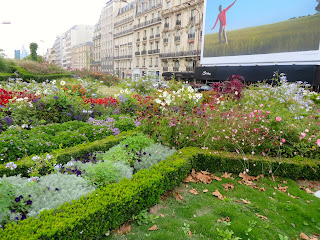 Dinner consisted of sitting on my hotel bed and eating a highly nutritious meal of ceased salad wrap, cashews, and pretzel m&ms. 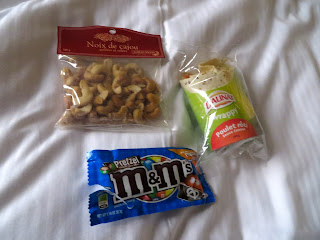 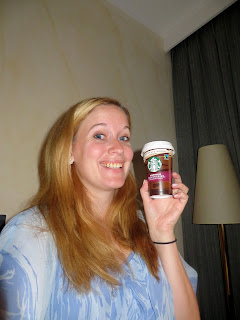 I also managed to get a little Starbucks in with a refrigerated mocha coffee. 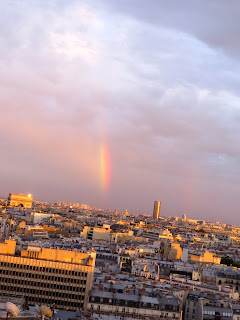 and we watched a rainbow outside our window while we ate!

After eating, mom, Papa and I went up for a drink on the top floor of our hotel. (Level 33 I believe?)

If you ever stay in the Hyatt I highly recommend going up to the 33rd floor for a drink. It is incredibly expensive, but completely worth it. 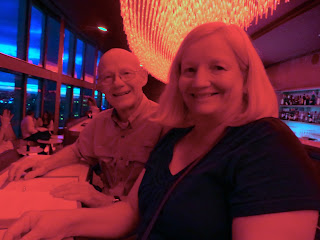 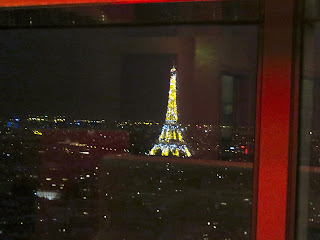 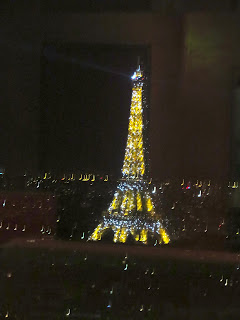 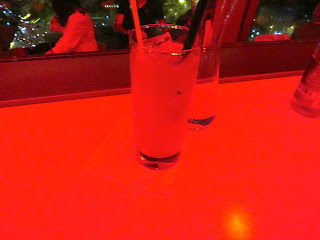 I had a malibu and pineapple juice and we watched the Eiffel Tower twinkle in the distance. It was an awesome time.

I also want to mention that the music was all American music- but all very old. We heard Celebrate by Koolio and the Gang, and a few other songs that were from the 70s, 80s and 90s. I guess Paris is a little behind the times in the music department!

Overall it was a magical last day in Paris! Today we spent the day driving and then the afternoon in Normandy (I'm currently writing from a hotel in Omaha Beach) so I will be back when I get a chance with todays recap!

Hope everyone had a great weekend!
Posted by Melissa at 4:24 PM