Happy Monday everyone! I hope you are reading this after having a fabulous weekend. It was definitely an exciting weekend around here complete with two Halloween parties and lots of sports-watching and cheering on my New England teams!

I didn't plan the theme of my Halloween costumes this year, I honestly decided what I was being as I went along through the weekend, but I ended up being two literary characters and didn't spend a single cent on either of my costumes! I thought I would share them on here since I try to do couponing posts and save you some money if I can- so now I will show you how you can create both of these costumes for basically no money out of your pocket!

On Friday night I had a Halloween party and my group of friends was going to be attending the party as Harry Potter characters. Since I have blonde hair, I decided to go as Luna Lovegood.

For this costume I collected a few items that I already had around my house... 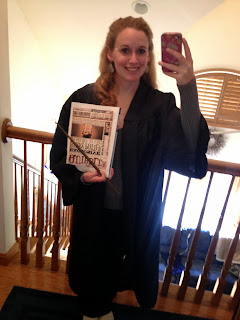 This costume would work for any character from Hogwarts/Harry Potter. In order to make it seem more like Luna- I took a recent issue of Cosmo and taped a "Quibbler" cover page that I found on google images. I made sure to tape it upside down because if you've read the books or seen the Harry Potter movies, you know that Luna is seen reading her fathers magazine upside down! 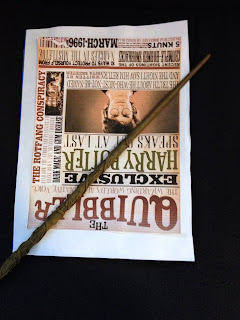 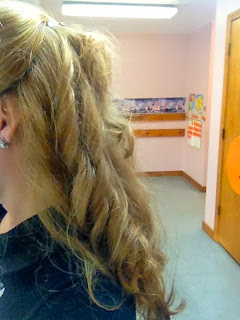 I also curled my hair for the party since Luna's hair is never completely straight. Plus why not curl your hair when you are given the occasion? =) 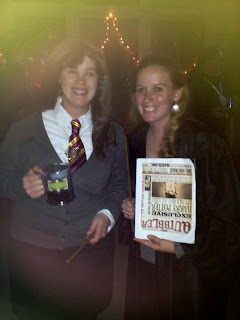 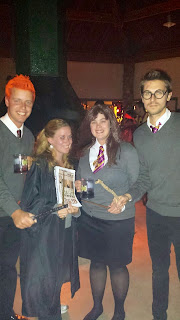 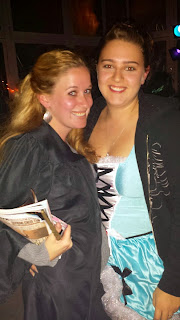 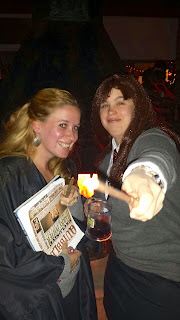 I had a great time at the party and definitely enjoyed being in a warm, comfortable costume! This costume was so easy to put together and was definitely recognizable. I highly recommend dressing like a Harry Potter character if you're looking for a quick, easy and cheap Halloween costume!

On Saturday night I decided to dress up as Katniss Everdeen from The Hunger Games.

My first step was to watch a youtube tutorial and learn how to do Katniss's well-known braid. 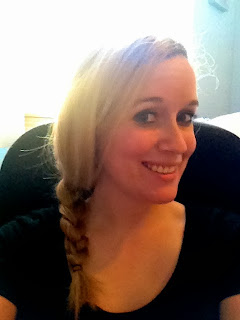 Although I had to try three times in order to get it to a place where it looked okay, it really wasn't as hard as I thought it was going to be. I started off with a dutch (or reverse) braid off to the left side of my head and then began adding pieces of hair into each side of the braid. Once all the hair was part of the braid, I just continued it and pulled it to the right side of my head.

I am no hair expert, but I think it turned out pretty well! If you are interested in doing this hairstyle, I highly recommend this youtube tutorial! 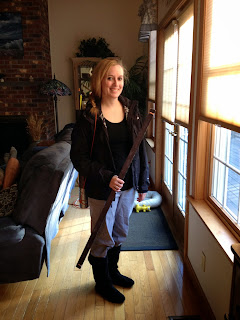 For my outfit, I wore a black t-shirt, my black North Face jacket (to resemble Katniss's windbreaker), gray baggy pants, and black boots. 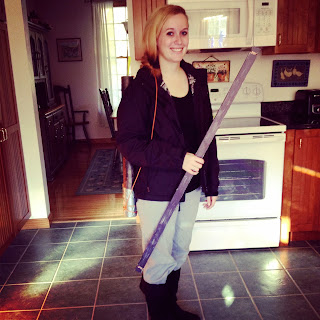 I'm also extremely lucky to have a handy and crafty father who helped me make a bow and quiver. We used a packing tube and taped off the bottom so I could put an arrow inside (my brother gave me an old arrow that no longer has a point). He used some rope and a leftover plank of wood to make my bow (which actually worked!).

I'm sure you have something around your house you could use to make these items! 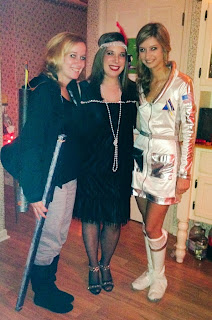 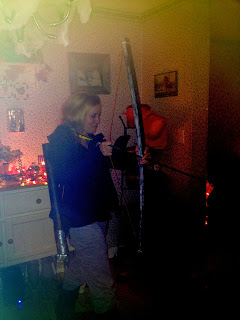 There's no reason to spend a ton of money on Halloween costumes! You can easily make a costume from things around your house and save a ton of money in the process!

What were you for Halloween this year?!
Posted by Melissa at 7:00 AM