Today I'm going to take you back in time- to Columbus Day Weekend! Yes, that's how far behind I am with posting. I'm going to share about the trip Tim and I took to Vermont :)

Tim's good friend Kate and her husband Mike invited a whole crew up to their home in Vermont for the long weekend to take part in Oktoberfest. I was so excited when Tim asked me to go because it's so nice to get away for a weekend and I hadn't seen Kate in years! (Kate and I used to play soccer together way back in the day!)

We arrived pretty late at night on Friday. It was a long drive after work! So we played a couple of card games and then went to bed, super excited about Oktoberfest the next day! 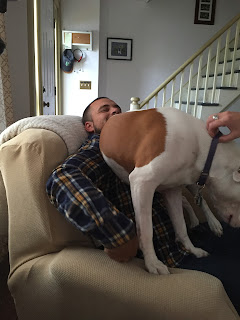 Kate and Mike have a pitiful named Pia and she LOVED getting on top of everyone and giving love! She was a super fun dog to play with too :)

The first thing we did was stop by a local art festival where they had so many different items by local vendors. Jewelry, food, and artwork- there was so many different things to look at. I unfortunately didn't take any pictures but it was a really cool place to walk around and was a nice way to break up the ride over to Killington. 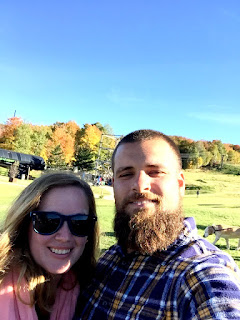 Killington was absolutely gorgeous! The leaves were all changing and it was exactly what you would picture Vermont to look like in the fall. The Oktoberfest was a small event but super fun. I ended up drinking a cider since I'm not a fan of beer, but it was pretty good! 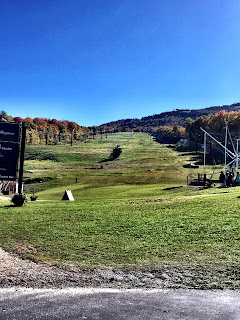 In addition to just having food, drinks and music- Killington recently added a roller coaster on their mountain! I wanted to go so badly, but it was a little expensive. It looked like a ton of fun though. 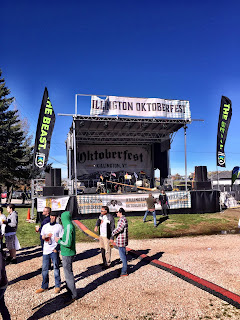 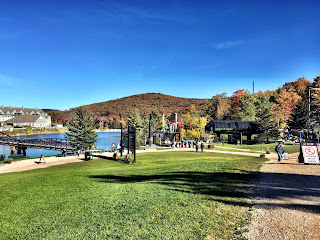 Now, they also had a little contest going on... 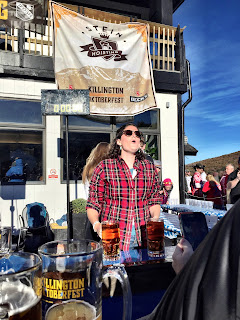 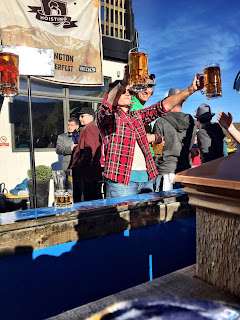 Kate decided to participate in the Stein competition! She had to hold two full steins of beer up without spilling. It was fun to watch her compete, and we actually stayed and watched several groups compete because it was so entertaining! 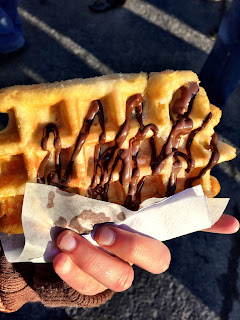 Also, how can you say no to a chocolate covered waffle? I couldn't! Luckily Tim shared this with me so I didn't eat all of it.

We stayed at Kate and Mike's another night, played a few more card games and an amazing game called Fax Machine and then called it a night. When we left early the next morning I was sad to head back to reality! It was such a nice weekend away! :)
Posted by Melissa at 9:12 PM