If you've been reading along for some time now you definitely know I'm NOT a cook at all. I would much prefer to be scrubbing the kitchen rather then cooking in it!

However I decided to make a special dinner for Tim and I a few weeks ago. We both love French Onion Soup and order it quite often at restaurants so I decided to try to make it on my own! 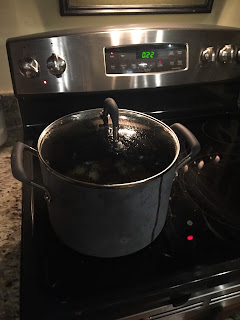 Here are the ingredients I used:


I loosely followed a recipe I found on allrecipes.com, however I found that I didn't use the parmesan cheese they recommended using.

1. First I melted the butter and olive oil in a pot on medium heat. Once those started melting I added in all the onions I had cut up. I stirred these for a few minutes until I felt the onions had been warmed up.

2. Next I added the beef broth (it was a TON of liquid) and thyme. I stirred those in and then shook some salt and pepper in as well. I'm not sure exactly how much I did put in but I added more salt then pepper.

3. I let that boil with the top on for a half hour. 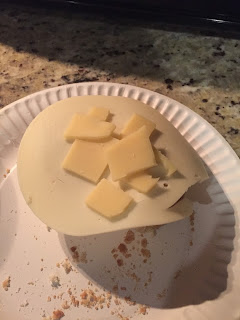 4. While I waited for the half hour to pass I prepped my cheese and bread. For each piece of french bread I topped it with a slice of provolone cheese and a half a slice of cut up swiss cheese. I prepped this on a plate so they would be ready to go once my broth was done cooking.

5. After the half hour had passed I scooped broth into oven safe bowls and topped them with the bread and cheese. 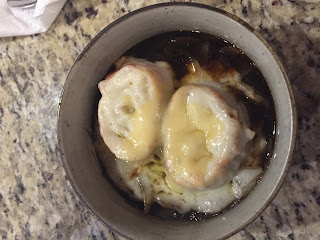 6. I simply watched the bowls in order to see how long to keep them inside. I believe it was about 20 minutes for the cheese to melt and look about right.

It was absolutely delicious! Although it was a lot of work, I will make this recipe again, I did learn it's difficult to have after for leftovers because you have to do the bread and cheese part all over again each time. I am very pleased with this recipe and would highly recommend it!

What have you made in the kitchen lately?
Posted by Melissa at 3:30 AM