We are not those crazy people who wake up super early on Black Friday and wait in massive lines to get the best deals. I was that crazy person who woke up and immediately start watching Gilmore Girls...but that's another story :)

We decided to head out later in the afternoon and just take a look around and see what we could find and we came back with quite a bit! I prefer to get the CVS freebies, some cheap movies from Walmart, and a few other deals. At this point the majority of my Christmas shopping is done so I'm basically just looking for things I don't want to pay full price for. 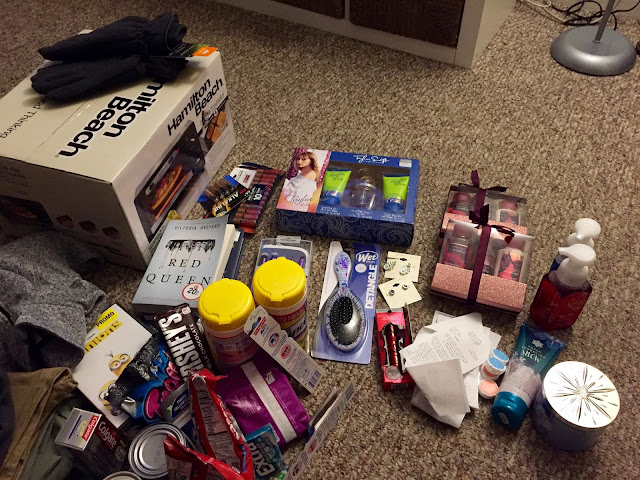 We started off at Kohls where we picked up a toaster over for $5.26 after all discounts. Plus we are going to get a rebate which makes it a money maker!
I grabbed a new Taylor Swift perfume set since I've recently finished this perfume and needed a new bottle. Makeup brushes, a hair brush, and a couple of earrings later I met up with Tim and he had a pair of gloves and we checked out and headed to our next stop....

CVS! Always my favorite on Black Friday because there are so many free items after ECB's. Here's what I picked up for free/cheap: toothpaste, lysol wipes, pantyliners, canned veggies, candy, toothbrushes, mascara, batteries, and gum.

We headed off to Walmart next and picked up a ton of DVDs. I also grabbed a sweatshirt that was only $9.

Target was next on our list and I picked up The Red Queen book for only $5.

Bath and Body Works was buy 3 get 3 free so I purchased two gift sets, two candles, two soaps, and then also had a free item so I picked up a lotion as well. (I don't need any more lotion!)

We also stopped in Old Navy where I picked up pants for work at 50% off.

Basically we were exhausted after this excursion but were very happy with the amazing deals we got!

Did you go out Black Friday shopping?
Posted by Melissa at 1:41 PM