Kai Bar and The Treehouse Tavern and Bistro

This past weekend we visited two local restaurants I wanted to share with you guys.

On Saturday night we met up with Tim's cousin Derek and his girlfriend Ally to get drinks at a bar on Main Street in East Greenwich.

Kai Bar is in a little building on Main Street and has a beach vibe from the second you walk inside. I was completely in my element. We each had two drinks and both of mine were very different. The colada I had as my second drink had cream in it so I ended up not being able to finish it because it was so heavy compared to everything I've been used to drinking lately. Everyone kept saying that their drinks were super strong though which is always a good thing!

Then on Sunday morning we went to The Treehouse Tavern and Bistro in Warwick for brunch. 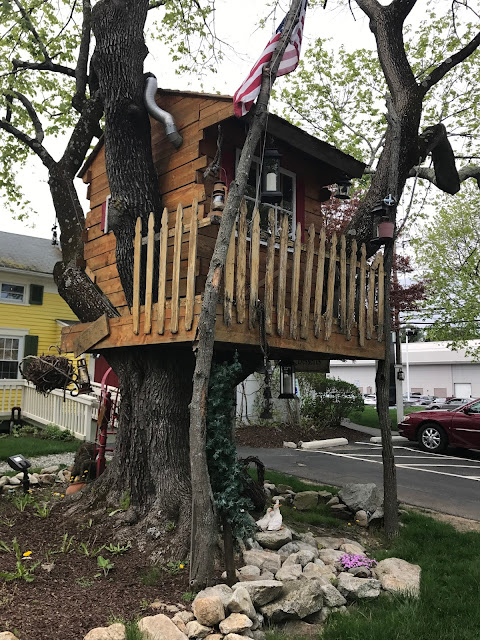 This treehouse is located outside, but the inside was even cooler. It was very eclectic and if you are ever in the area you definitely need to check it out. There were so many decorations I found myself distracted and looking around constantly. The brunch was also delicious and I ate my bacon and cheddar omelette, rosemary potatoes, and toast quickly. Everyone else had a drink with breakfast while I enjoyed some tea. I would definitely go back to this restaurant in the future because it was so different!

What new restaurants or bars have you tried out lately?
Posted by Melissa at 2:30 AM