Guys I am loving summer time! I feel like we hibernate all winter  and then finally get out and have a good time in the summer!

We ended up at Sons of Liberty (a local whiskey distillery) on both Friday night and Saturday afternoon.

On Friday night we met up with Dan, Danielle, Ally and Derek and had a great time! 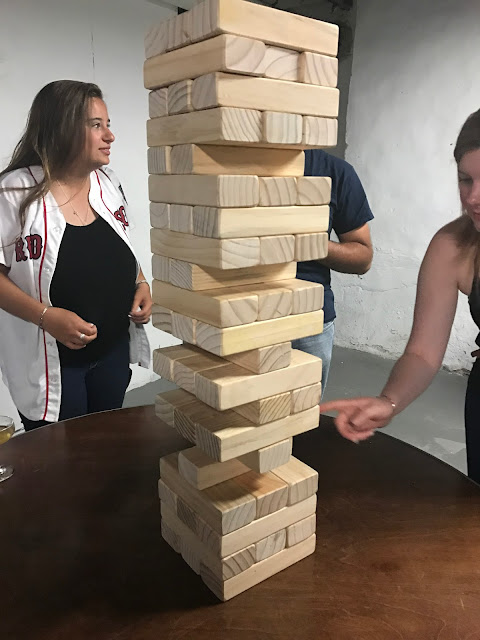 The huge Jenga set they had was a hit with us! It was pretty terrifying to play and got challenging once I had trouble reaching the top! 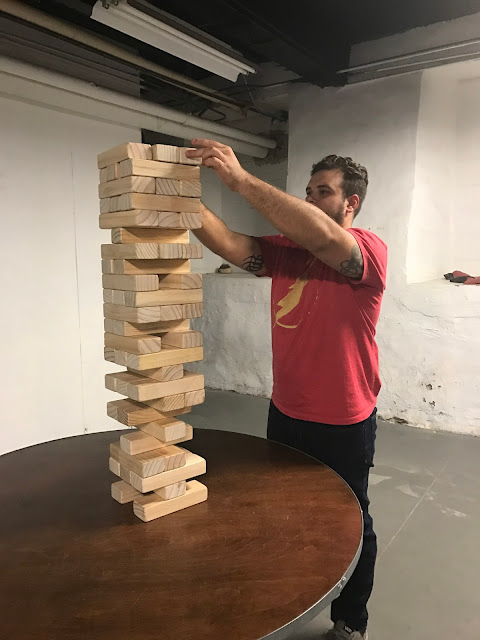 I took a few pictures because we managed to get it to the point where there were plenty of areas with only one block so it was swaying all over the place!

While we played we also enjoyed yummy drinks. I always get a whiskey drink when we go, but they also have vodka and beer. 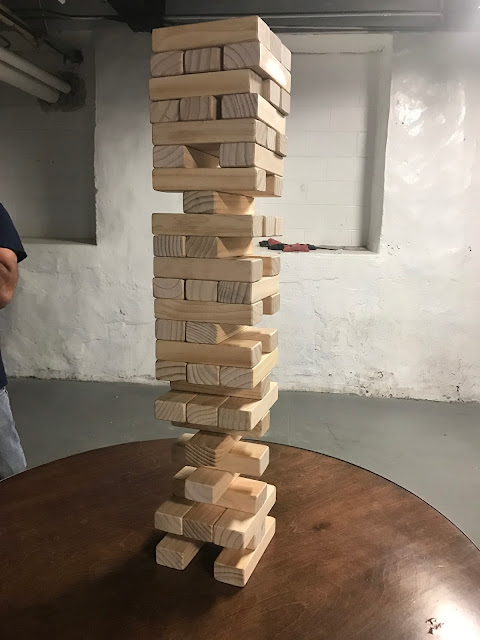 After playing Jenga for a bit we all were hungry so we headed over to the Mews Tavern. I requested a picture of the three girls... 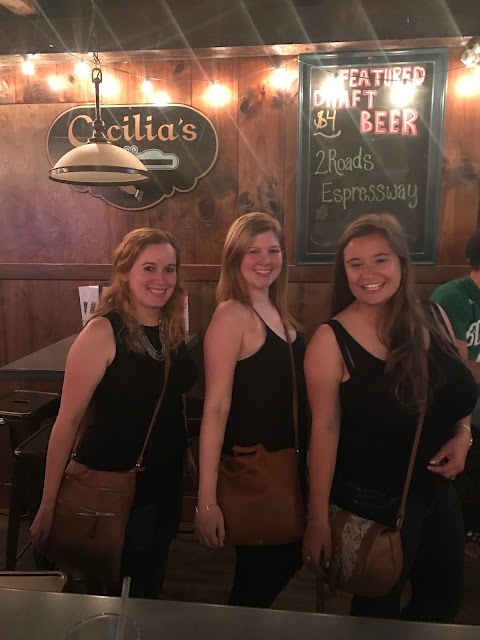 because we all had basically the same outfit on! How we all showed up in black tank tops, blue jeans, brown bags, and sandals I have no idea! Ally and I even had the same exact pair of sandals from Old Navy on. 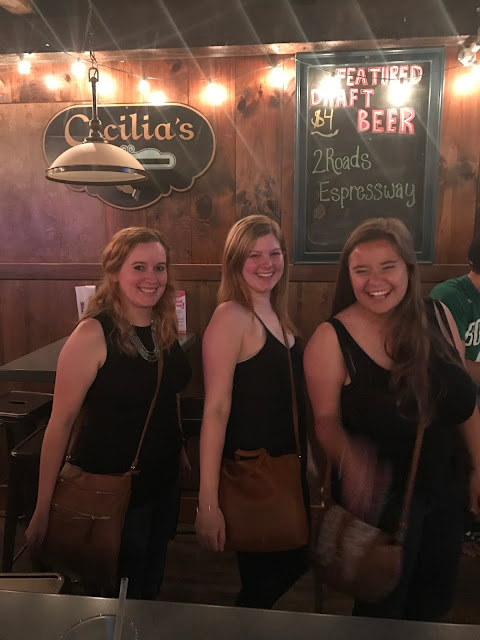 At least we all look cute!

On Saturday we met up with my parents for another round of Jenga and some corn hole. 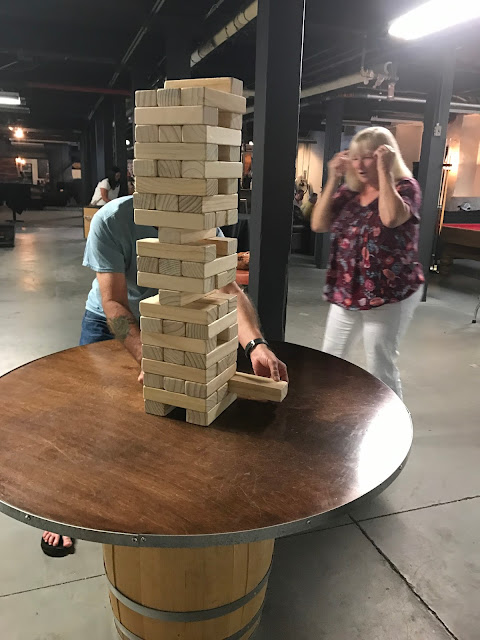 It was fun to see my moms reactions she was a nervous wreck as we played! 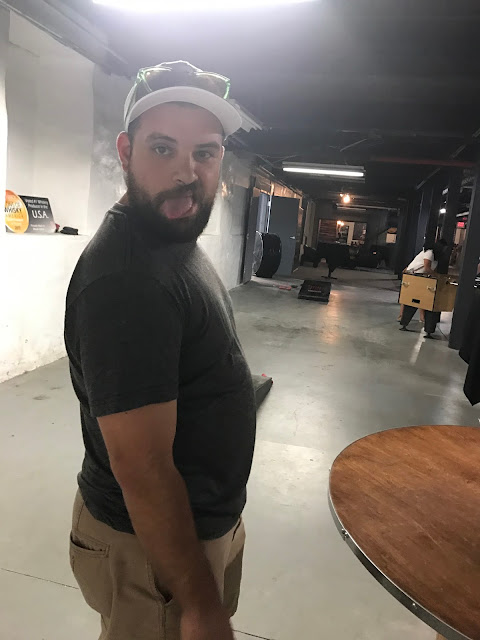 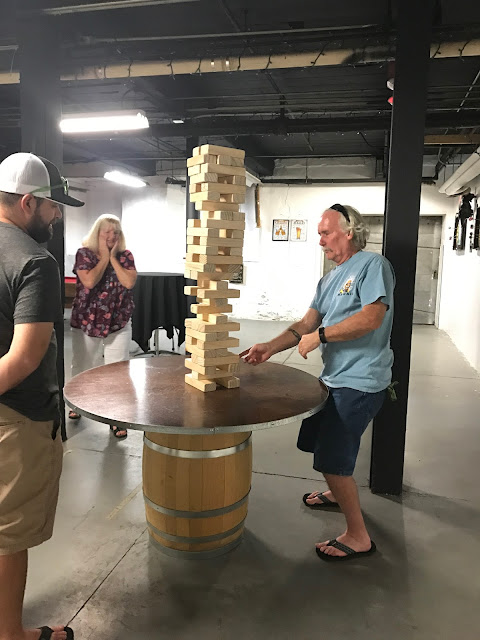 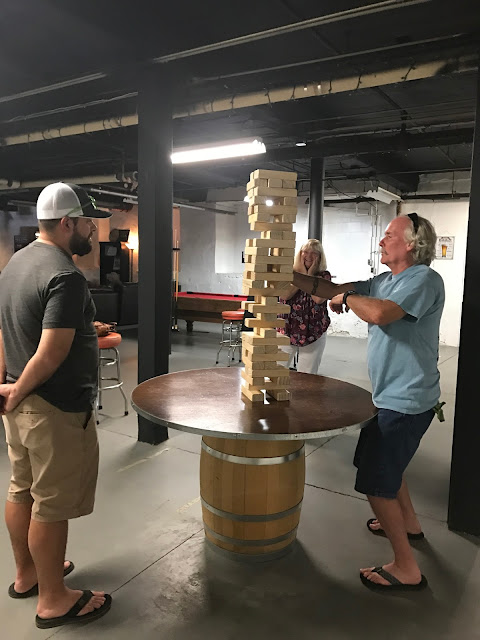 We hung out for a couple of hours playing games and drinking... 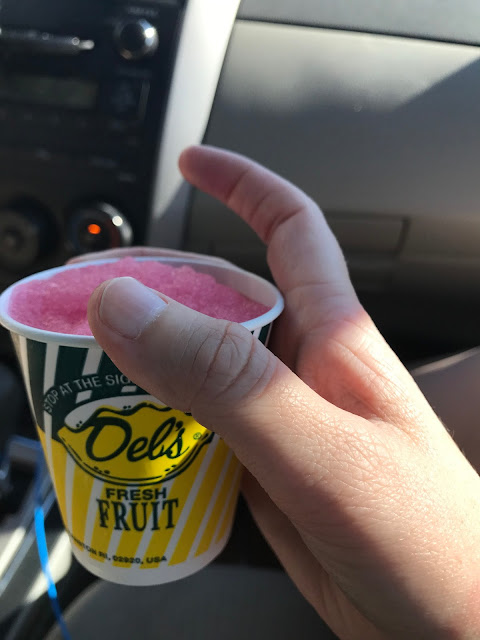 And then Tim and I went to get Dels! If you're not a native Rhode Islander then you might not be familiar with Dels but their watermelon lemonade is amazing so if you are ever in my neck of the woods give it a try!

Saturday night Tim and I went to see Wonder Woman in theaters. It was an amazing movie! I highly recommend it if you're looking for a night out at the movies.

On Sunday after breakfast and a brief shopping trip with Tim I headed off to Brittni's 29th birthday party while Tim went to play golf. 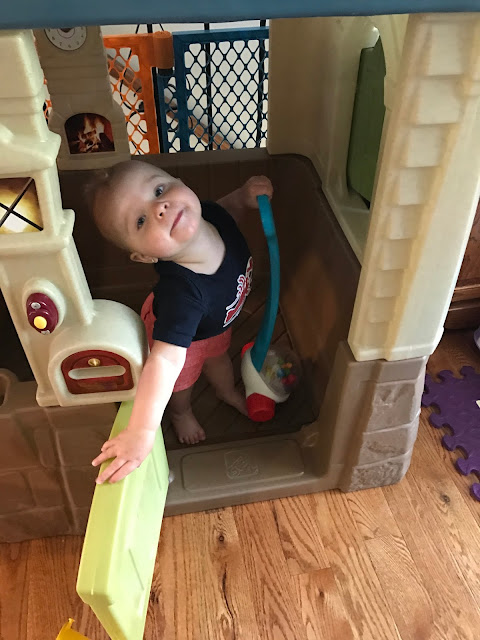 How cute is this kid? I can't even handle her. 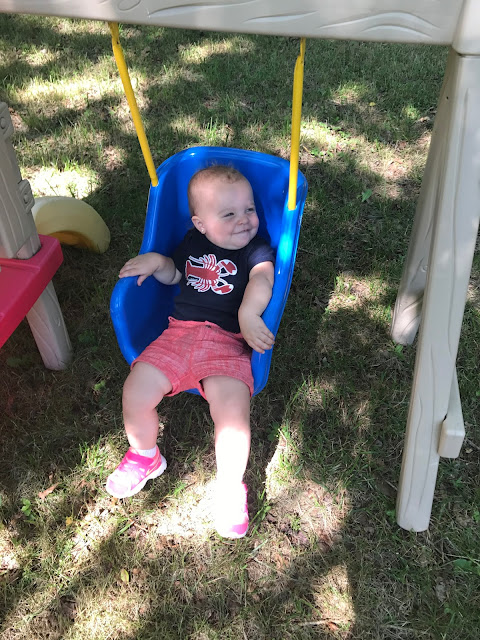 I spent most of my time out on the lawn with all the kids moving around water toys and washing off outdoor toys. 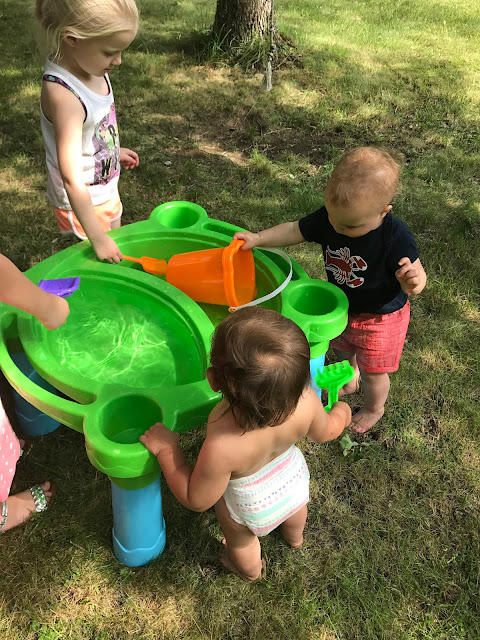 Seconds after this picture was taken Emma dumped water from the bucket all over herself. So soon after she ended up in the kiddie pool with Bella. 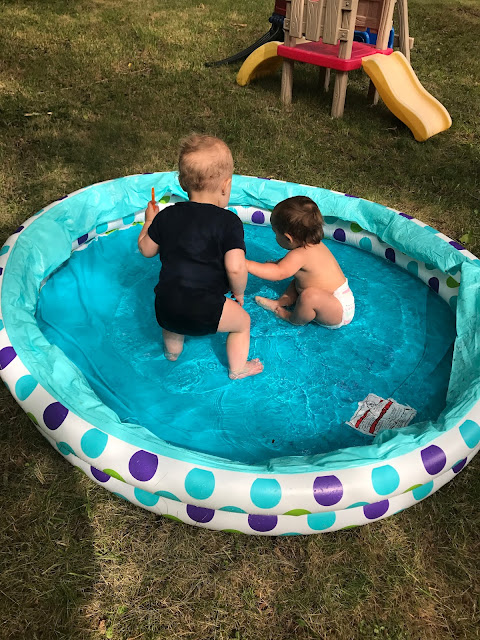 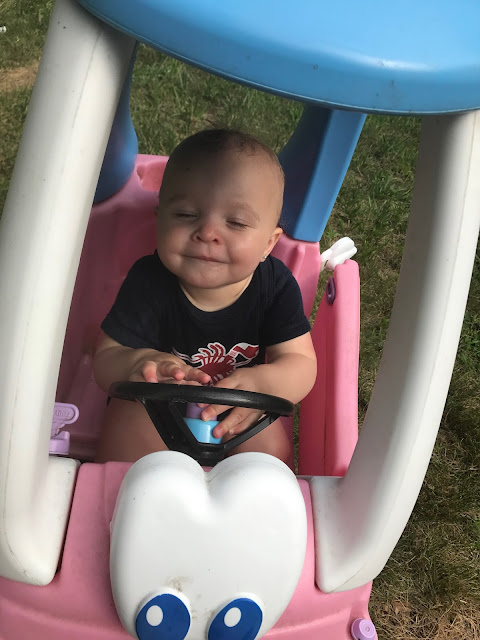 After playing and some delicious food it was time for truffle that Brit's mom makes. I don't eat peanut butter cups (I know I'm weird but chocolate and peanut butter do NOT go together!) so Brit's mom made me my own version without them inside. 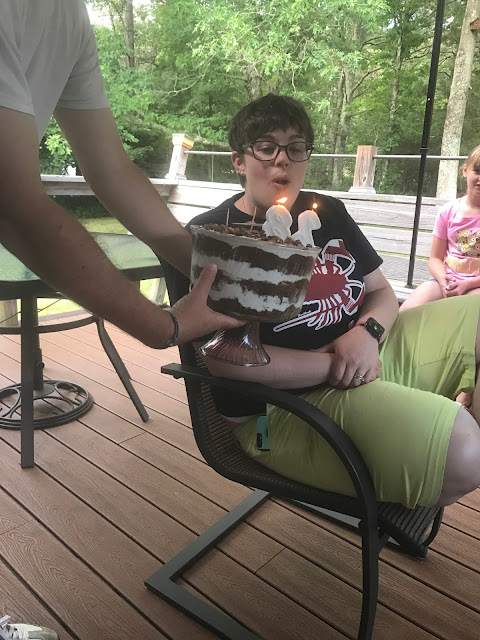 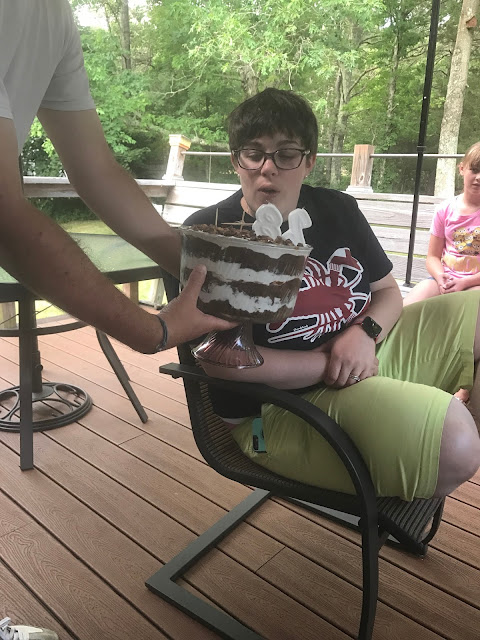 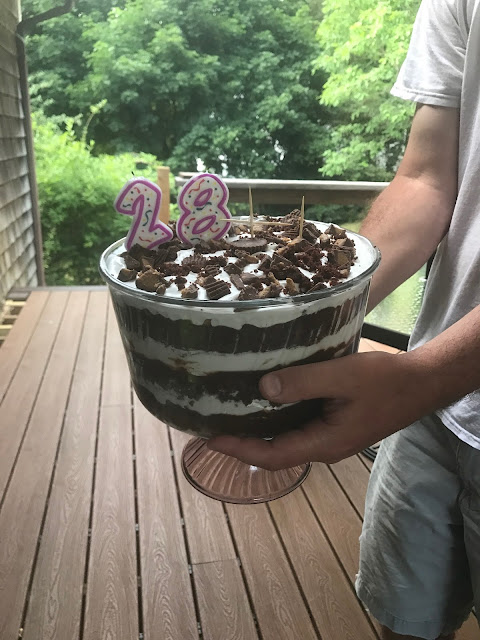 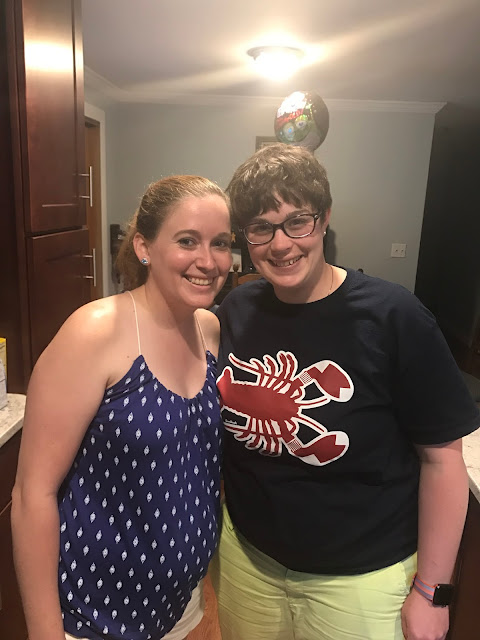 It was such a fun afternoon and I enjoyed celebrating with one my oldest friends! (oldest as in longest!)

What have you been up to lately?!
Posted by Melissa at 3:30 AM