Good morning! Today I'm sharing our Sunday in Disney which started with some football at the ESPN Club on the Boardwalk.

We took a bus from our hotel to Hollywood Studios and then hopped onto the boat to get to the Boardwalk. It sounds like a lot of switching transportation but it wasn't too bad. 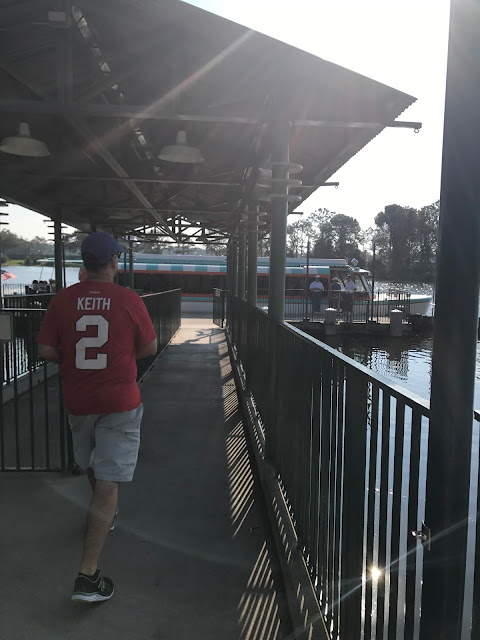 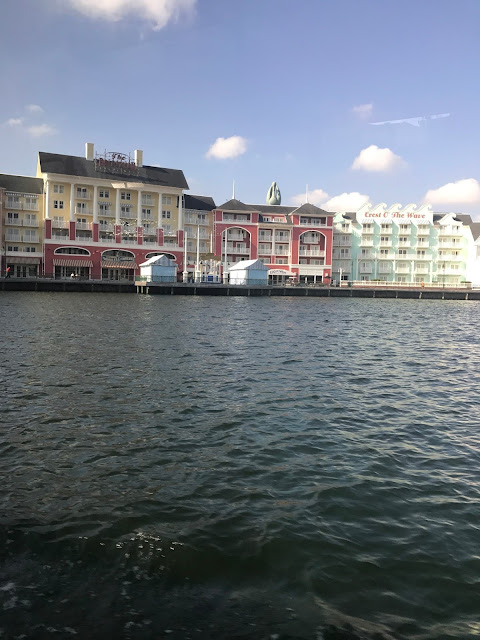 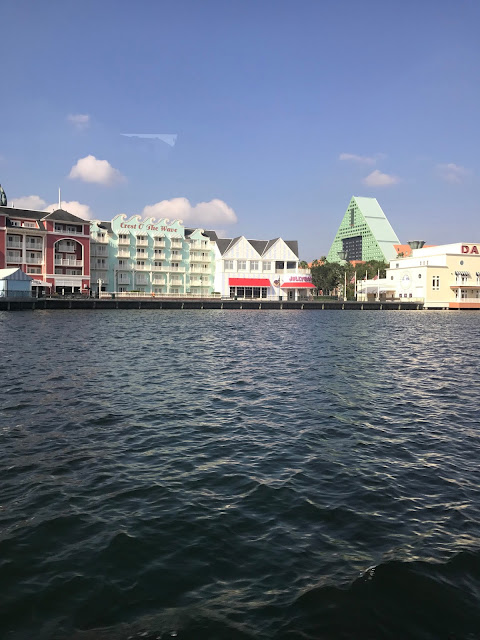 Once we arrived at the Boardwalk we had a bit of time until ESPN Club opened up so we waited for a bit outside and ate some breakfast from the Boardwalk Bakery. 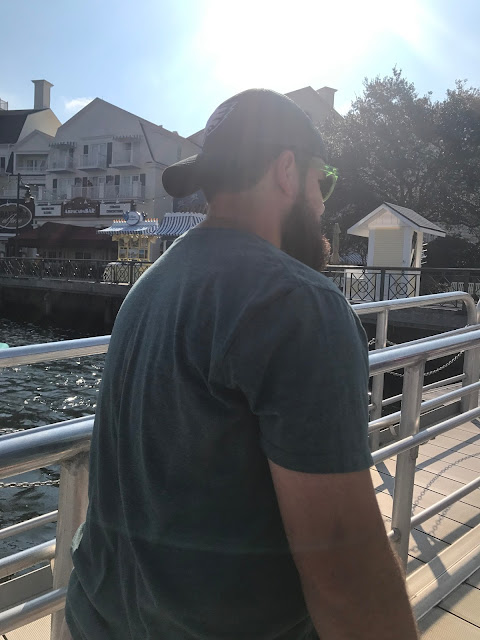 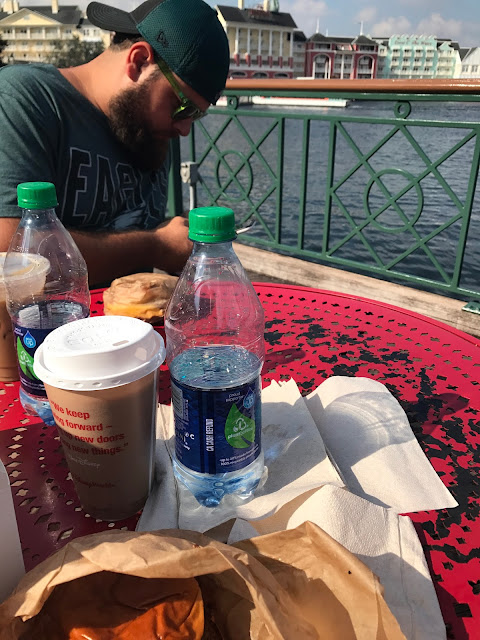 It was such a beautiful day and we enjoyed eating our breakfast in the sun. 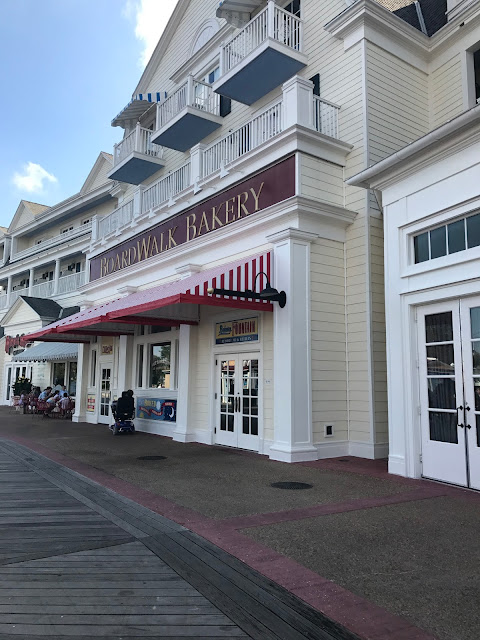 The ESPN Club was something Tim picked out and decided we were doing for football. I told him I didn't care where we watched the game and he did his research to find the best spot for us to watch. 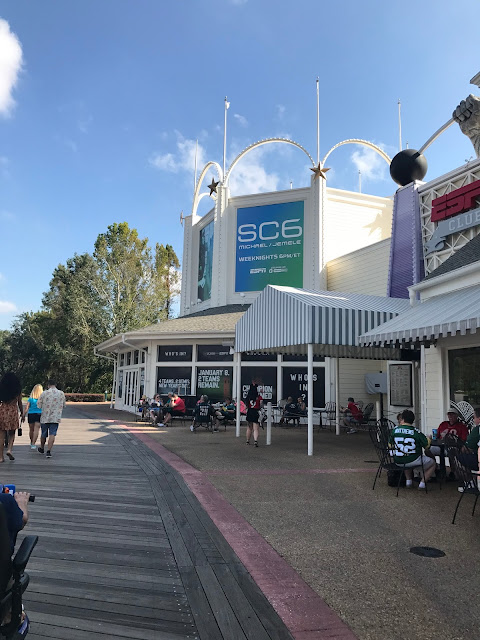 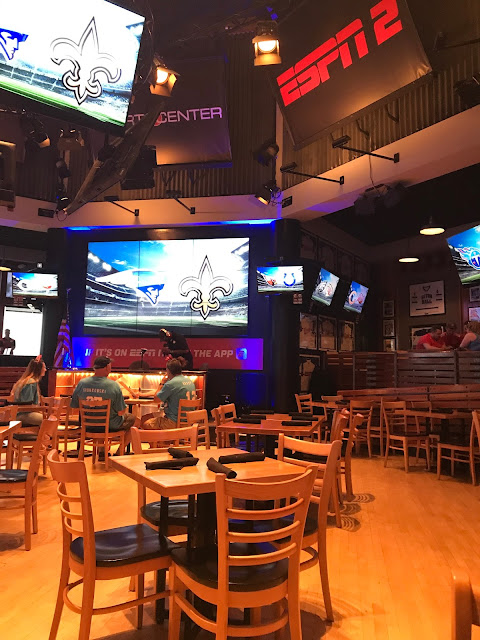 It was a cute concept and they even had some trivia going on before the game. Tim won a t-shirt which was pretty cool. 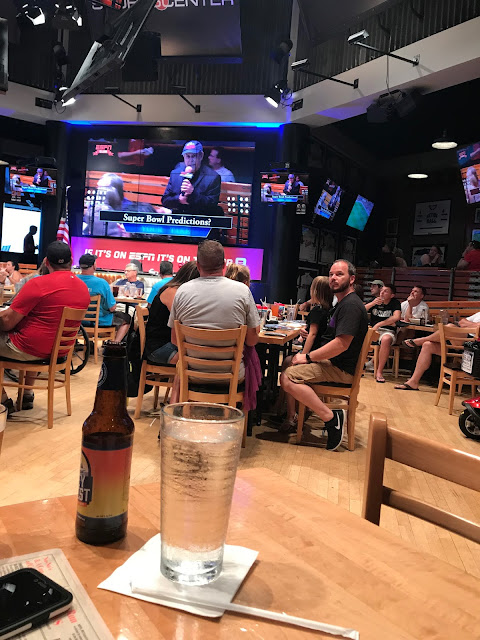 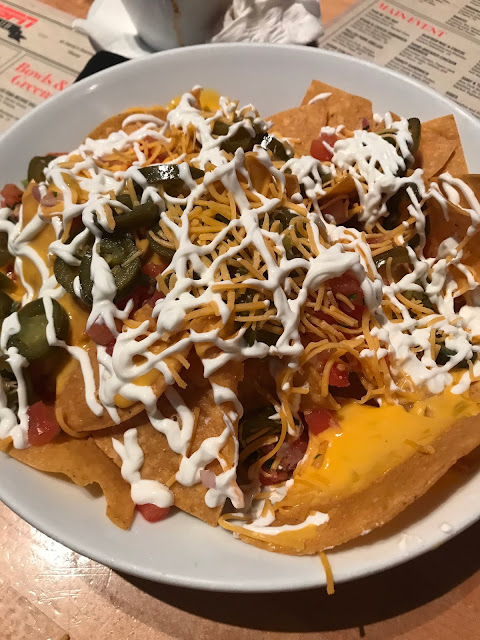 We ended up getting some nachos which were delicious! 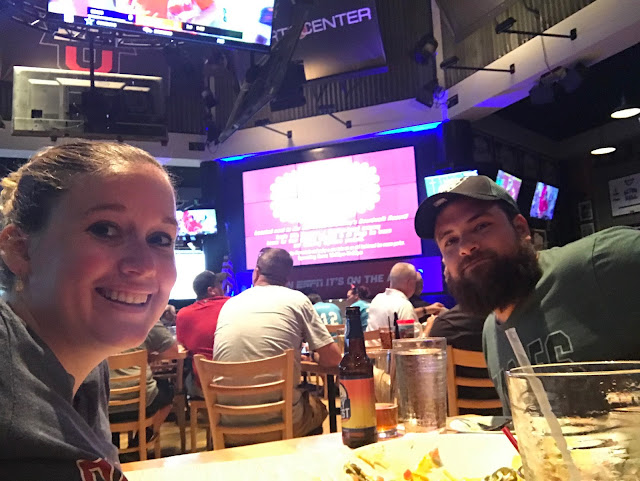 We also had some drinks and enjoyed watching the games (Patriots for me and Eagles for Tim) We had a great time and would highly recommend checking out this location if you are looking for a place to watch any games while you are in Disney.

After the games were over we walked through Epcot to meet my favorite character.... 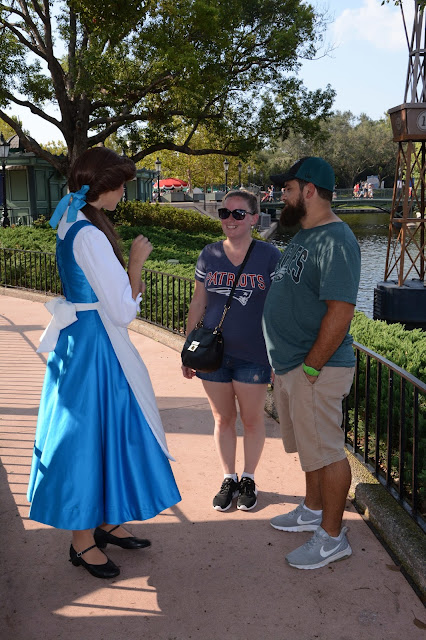 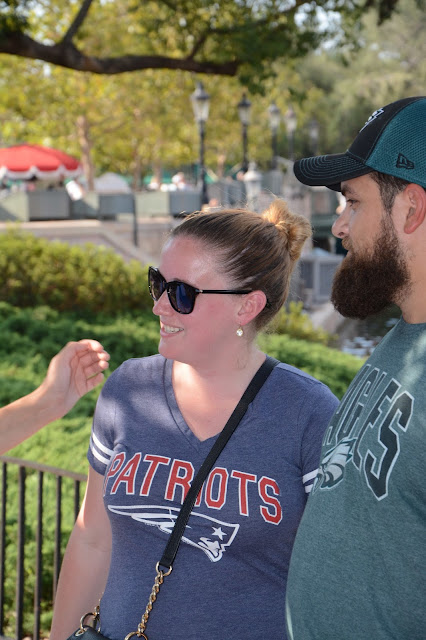 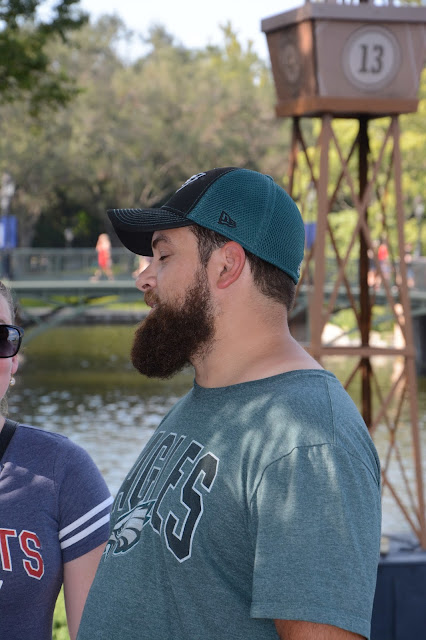 We told her all about our dinner the night before at the Beast's castle and took a few pictures. 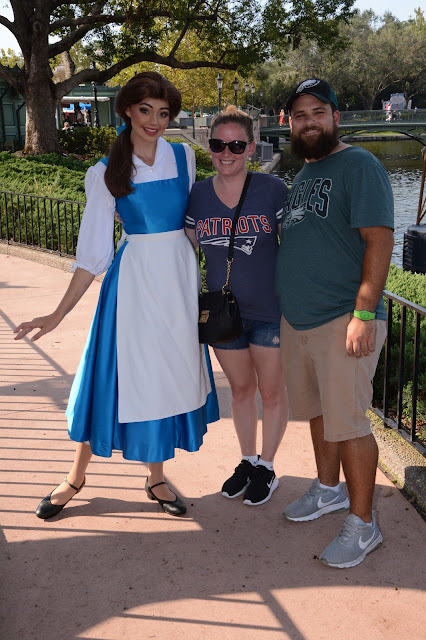 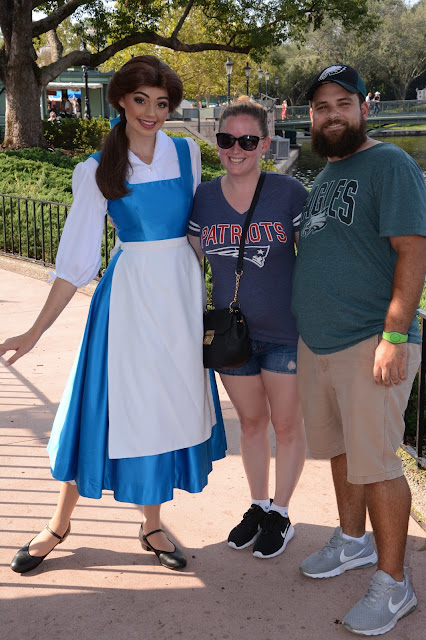 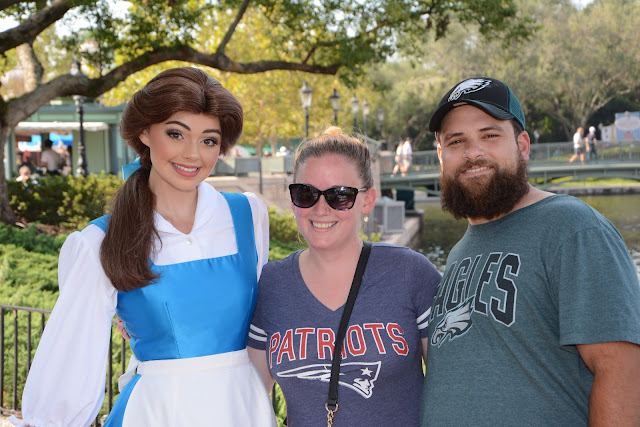 We then worked our way out of Epcot to the buses since Tim wasn't feeling very well. We decided to rest back at the hotel for a little while.

When Tim was feeling better we headed to Disney Springs for dinner. We decided on Planet Hollywood and were able to get in within five minutes without any reservation. 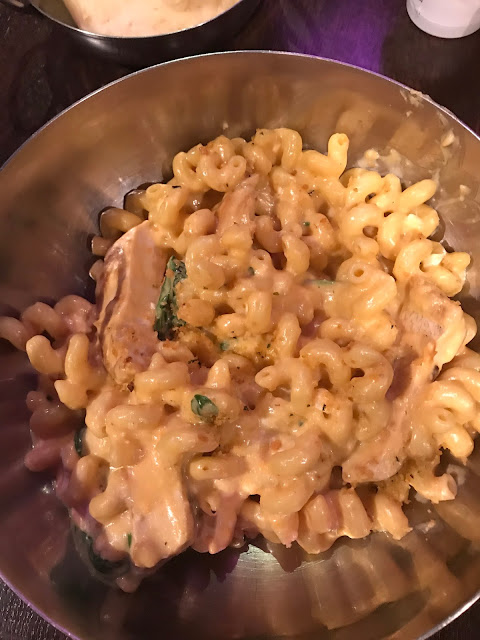 I had the macaroni and cheese which was delicious. 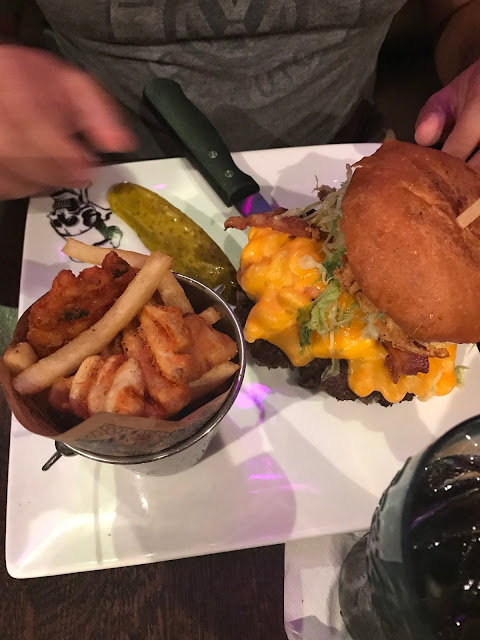 Tim got the mac and cheese burger which he said was delicious as well.

Planet Hollywood is in major cities and I know I've been to one in NYC before but Tim had never been so it's something you have to experience at least once!

After dinner we walked through the shops and Tim tried on some hats... 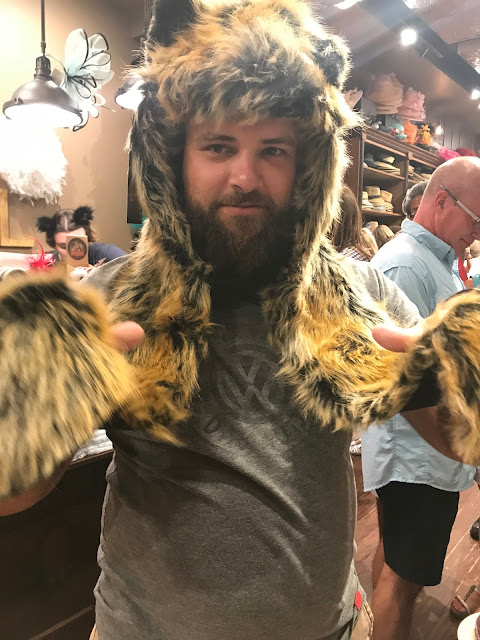 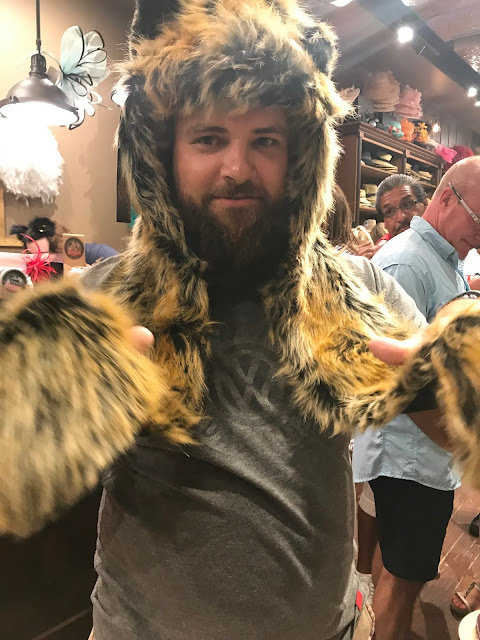 I think it looks great! 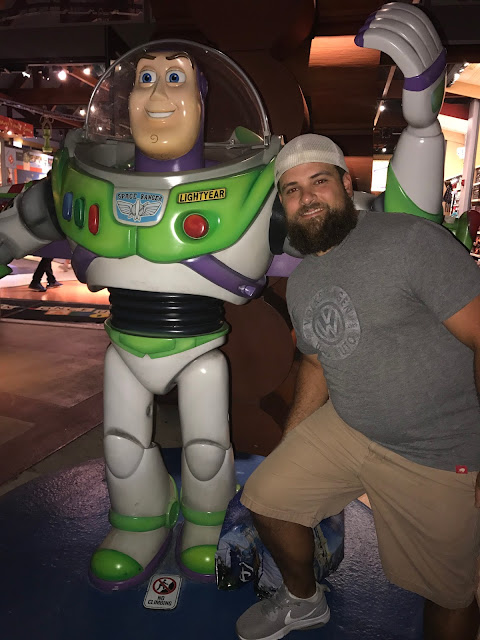 I also made Tim pose with Buzz Lightyear before we headed to the bus to go back to the hotel. It was a fun night and we picked up a few gifts and some things for ourselves as well. Gotta love Disney shopping :)

Have a great day everybody and stay tuned for more posts!
Posted by Melissa at 3:00 AM