It's Monday again friends- how does that always seem to happen to us?

We had a great weekend here and went  on an adventure to Boston! Months back I had seen a Facebook event for the Boston Pizza Festival and told Tim about it since pizza is basically his favorite thing on Earth. (besides me of course- haha) So we both had it on our radar. This past week Tim brought it up again and we decided to take a weekend away in Massachusetts!

After he got home from work on Saturday afternoon we packed our bags and headed towards Boston! Since Tim had booked us a hotel slightly outside of Boston we decided to not head into the actual city until Sunday but we kept ourselves entertained and headed to Patriot Place. 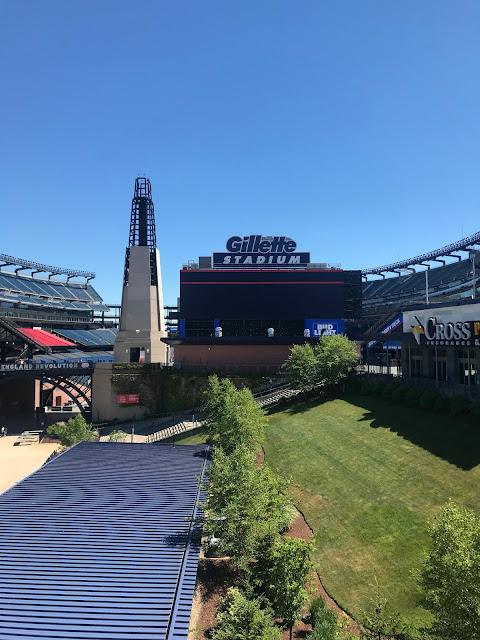 In case you aren't aware this is the home of the Patriots (my team) and we had fun wandering through the stores there and stopped for lunch at Scorpion Bar. 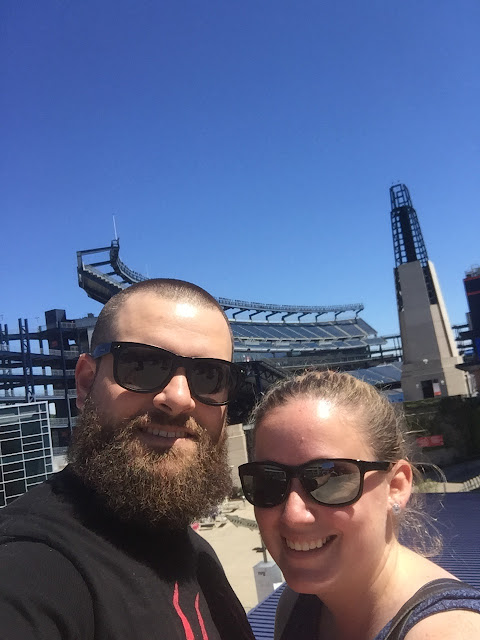 Saturday was such a beautiful, sunny day with perfect temperatures so we didn't mind walking around outside at all. We've been to Patriot Place before so after a few hours we were ready to move on! We decided to check into our hotel The Westin Waltham which was very nice. We debated what to do that evening since we wanted it to be pretty low key and ended up at the Natick Mall which was a ton of fun. We have the best time wandering around together just looking in stores and checking everything out. The mall was HUGE compared to our Rhode Island standards so it was a fun change.

We headed back to the hotel fairly early to get a good nights sleep because we planned on heading to Boston fairly early in the day to get some walking in! 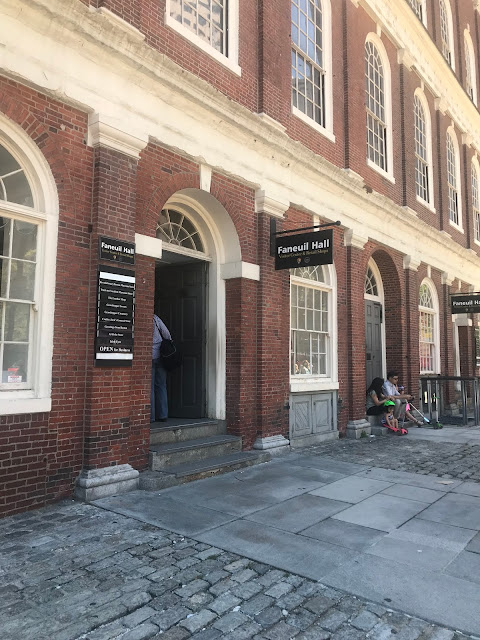 We took the T right to Government Center and from there took a walk around Faneuil Hall and Quincy Market. 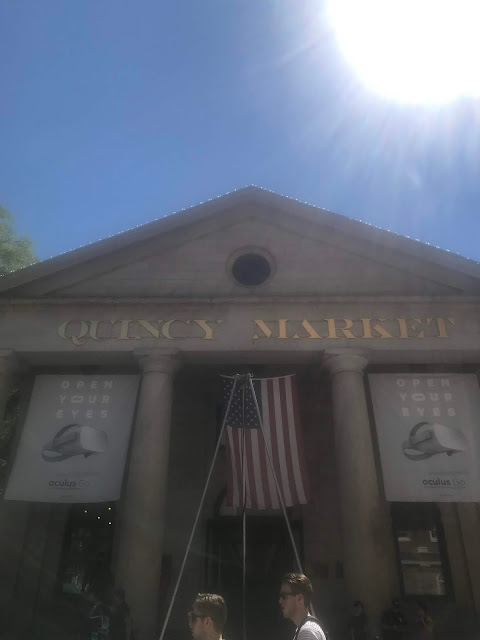 Boston is such a walkable city and I always feel so impressed with the history that surrounds me when I'm there. It's also beautiful with its waterfront areas and architecture. 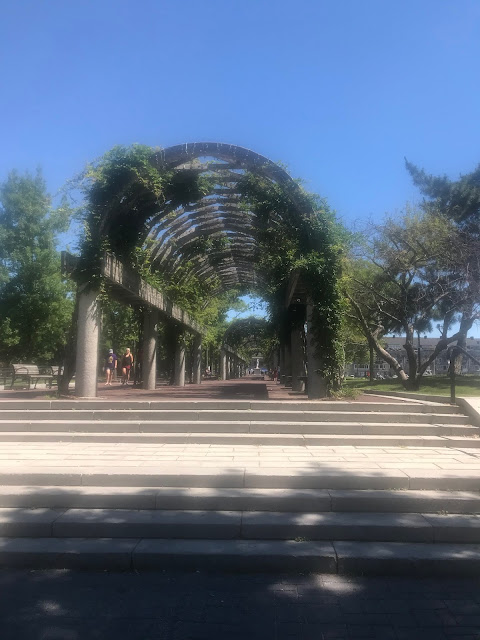 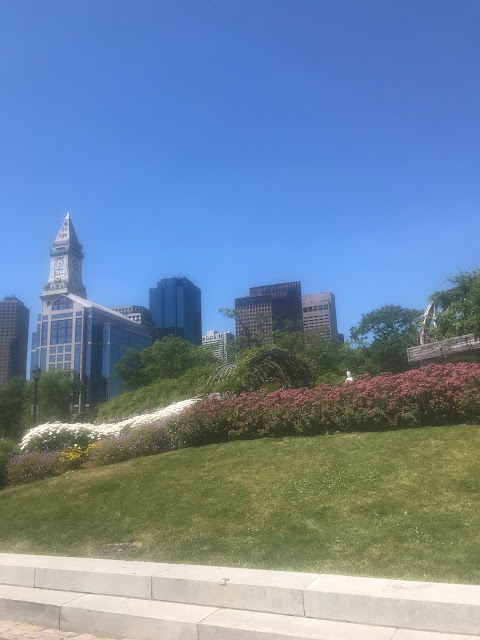 They also do a fantastic job of creating green areas where you can enjoy gardens, grass and other bits of nature. 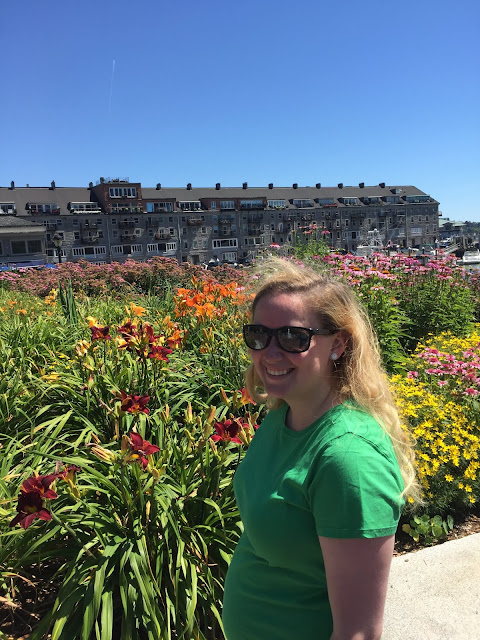 Please ignore the sheer ridiculousness of my hair in this picture. It's out of control. Also, I really need to work on my posture..and wedding diet... 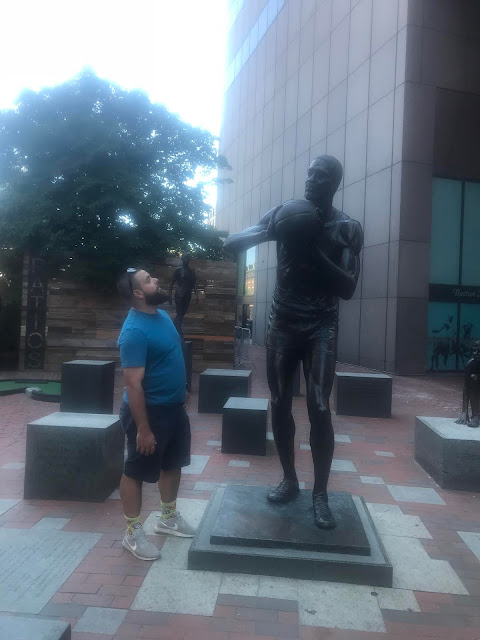 There's always so much to see! 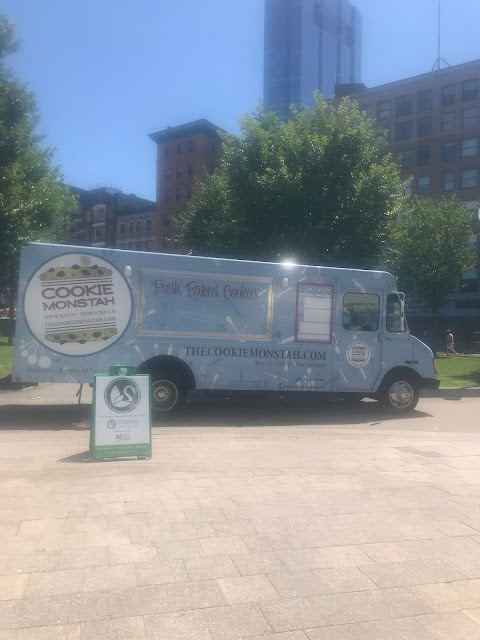 When we were walking through the Boston Commons I saw this Cookie Monstah truck drive by... I heard about it previously and wanted to try it...I really hoped we would see it when it finally parked somewhere. 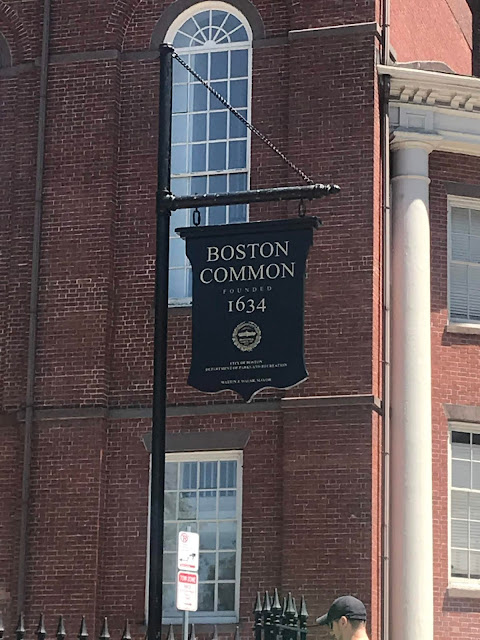 After we finished our walk around the commons it was time to head to the Pizza Festival! 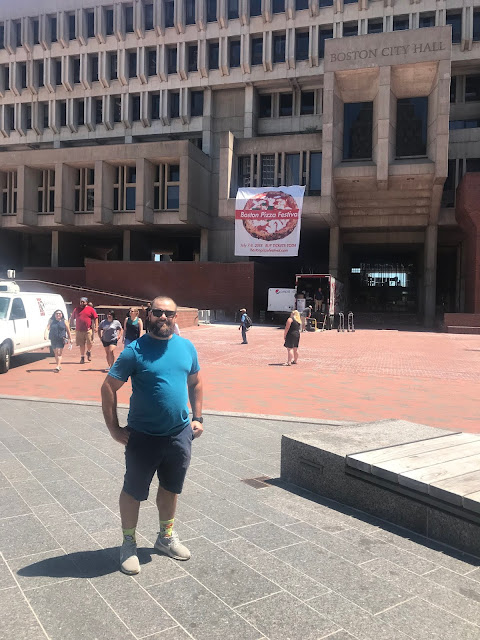 Tim was so excited as we strolled towards the entrance. 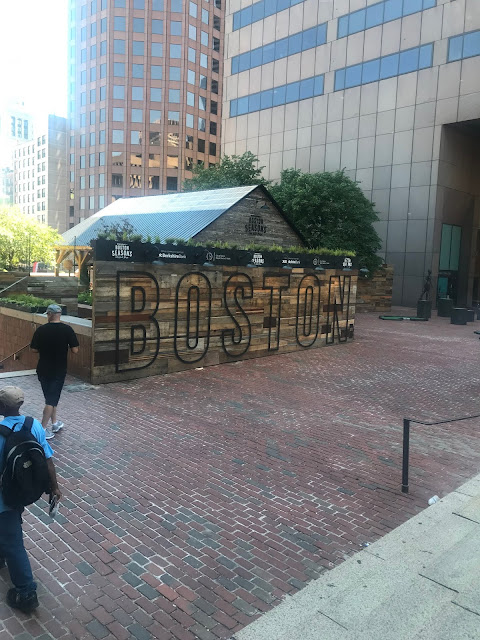 I love this Boston sign- how cool is it?! 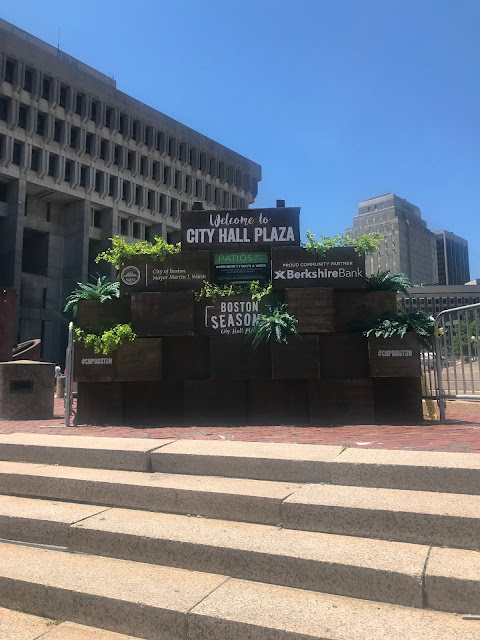 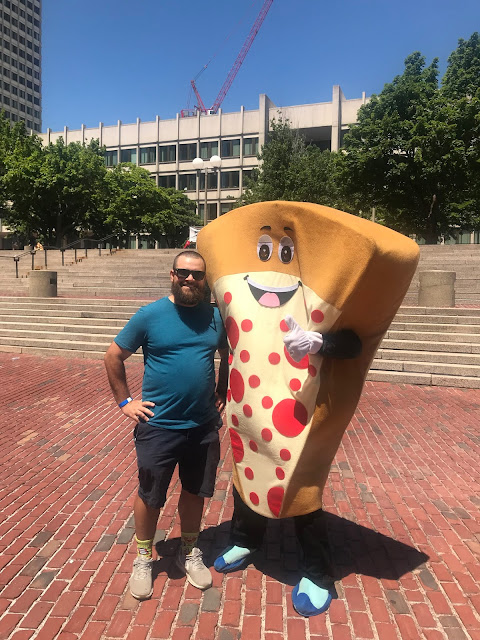 There's Tim in his element- hanging out with a slice of pizza. 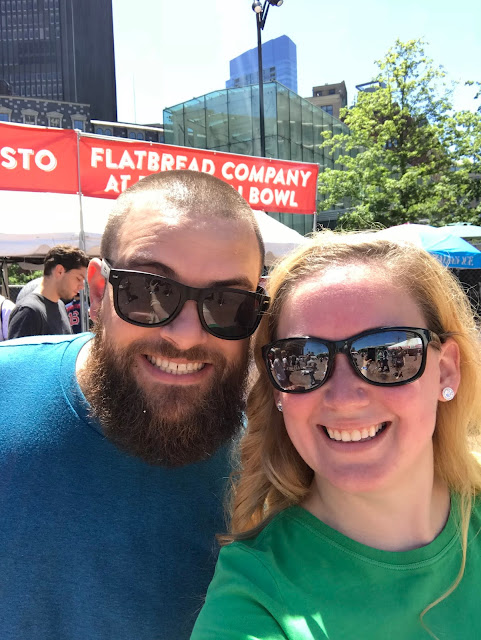 Look how excited he is! We meandered through the festival trying different types of pizza. Tim at a ton, I tried a few different ones. There were definitely a lot to try and all of it was free with your admission. Drinks and other items were not included which is where we spent our money- particularly on waters since it was so hot! 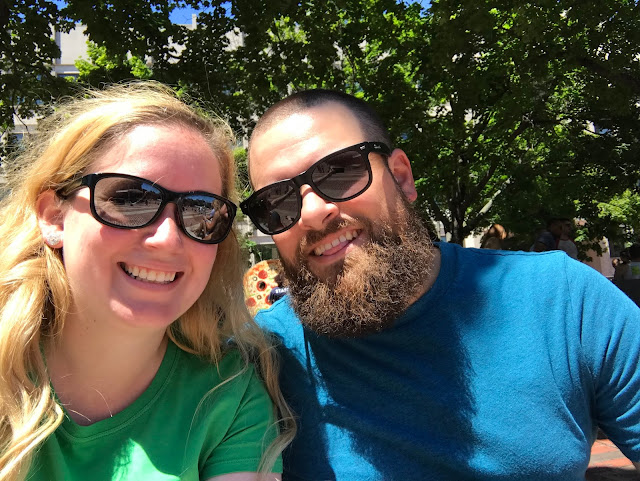 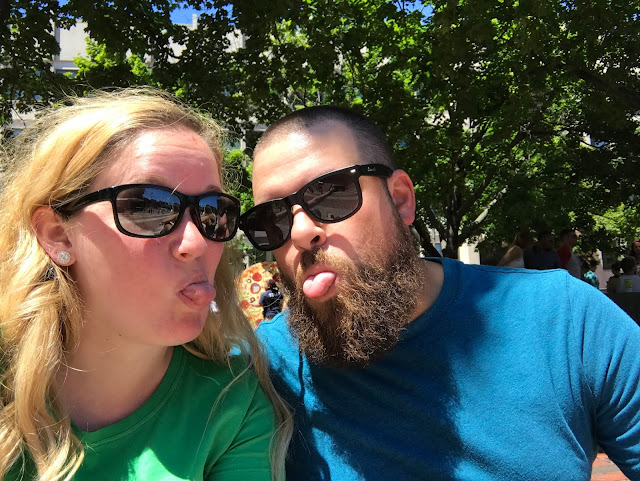 We watched one of the shows where two boys were flipping pizza dough around, we entered a few contests, got a ton of free swag and then decided we were good to go! 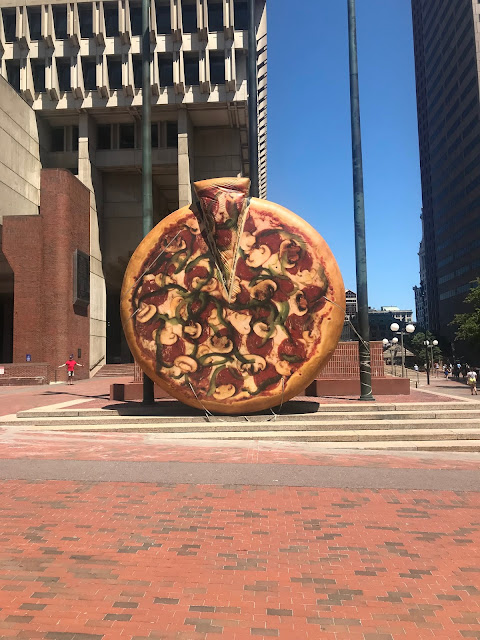 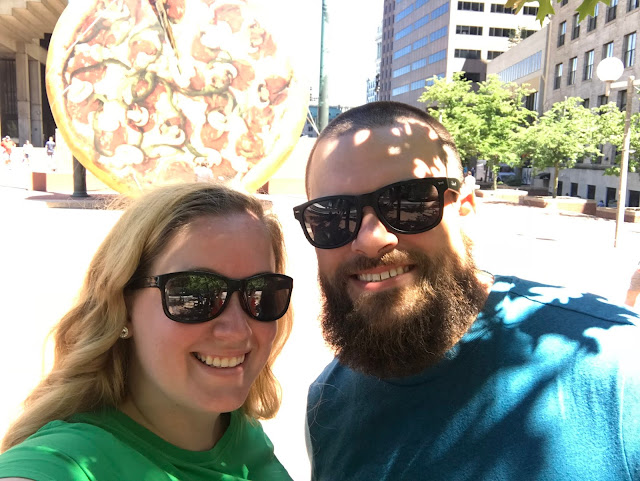 One last picture with a giant pizza and it was time to go! 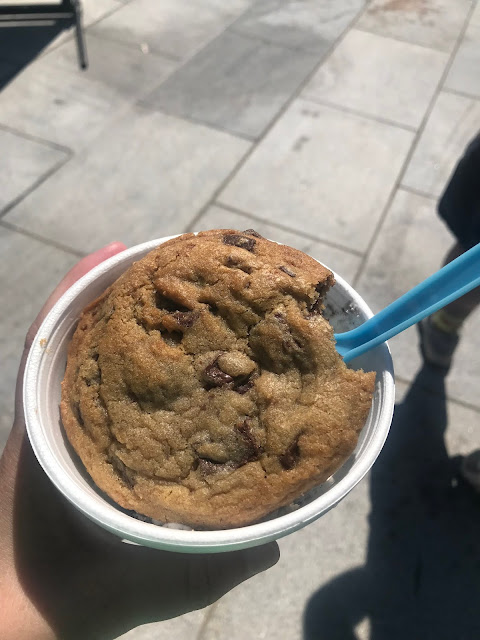 Before leaving Boston though I did get my Cookie Monstah treat! A chocolate chunk cookie on top of Oreo ice cream, yum!

We had a great time in Boston and there is still plenty there to do that we didn't have time to do on this trip so we will definitely be going back again in the future :)

What are your favorite things to do in Boston?
Posted by Melissa at 2:00 AM