Happy 4th of July to all my American friends! To everyone else- Happy Wednesday! We are halfway through the week :)

Today I'm sharing all of my June empties with you and also a declutter! I finally managed to declutter two items that were just realllllly old but I was having an extremely hard time letting go of.

While we're already chatting about it- let's just start with the declutter shall we? 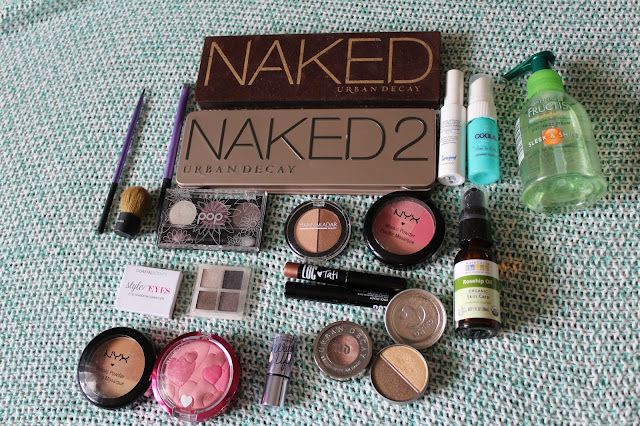 So many items! I had a ton of products in my collection that were just really old or I never used so it was time to let them go! The Naked palettes are so of my favorites but I purchased them back in 2013 meaning they are 4 years old! I really shouldn't be putting powder that old on my eyes AND I have new palettes that aren't getting any attention because I'm too busy using these up. Time to say goodbye!

Some other shadows I gave up were an Urban Decay Sin single which I loved but came at the same time as the palettes, two coastal samplers that I never use, a Pop trio which I hate the consistency of and the purple is not flattering, and a a Cargo sample I think I've used once. I also had two finishing sprays that were well past their expiration dates. Two shadow sticks that were almost empty and pretty old. A couple highlighters I never use along with two NYX powders that are SO old. The Physicians Formula blush is really old and way too pink for me and the Rosehip Oil broke me out. Finally the Garnier Fructis bottle has been around for wayyyyy too long and is probably disgusting.

I also ditched three brushes that I never use!

22 items out of my Alex 9 drawer and I feel so much better! There's probably still a ton I could get rid of but for now this makes me feel good!

Now onto the empties for the month- and there are quite a few! 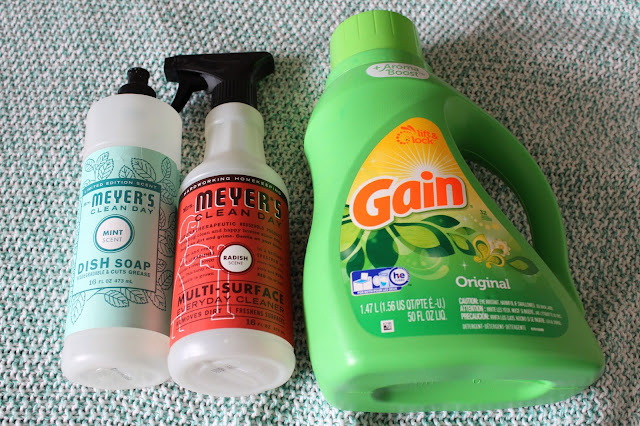 Three of my household empties are up first. I am still loving the Mrs. Meyers mint products and this dish soap is no exception. The smell is simply fresh and clean which makes for doing dishes fairly pleasant which is all I can ask!
The Mrs. Meyers Radish Multi-surface spray was not my favorite! I love these sprays in other scents but the Radish was just not my cup of tea- I did completely use it up before moving on but I much prefer other scents from the collection (especially Basil- AMAZING!) so I will not repurchase it in this scent.
I had never used Gain laundry detergent before and I liked it. The scent was great and I would repurchase it in the future but I think I may prefer my Tide! I have seen many different scents from Gain though so I may have to try some others in the future. 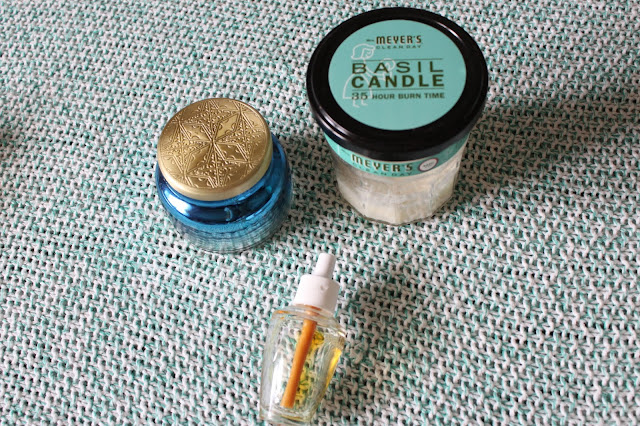 Three great scent products this month. The first is a candle I received as a gift from Anthropologie and it was amazing! The jar itself is so pretty and the scent (I think it's called Capri Blue Volcano) is great. I'm not sure I would repurchase but it did make a lovely gift.
I picked up the Mrs. Meyers candle in Basil on a whim and I'm so glad I did. I would repurchase this over and over again! If you get a chance- pick up everything in Mrs. Meyers Basil- you won't be disappointed!
Lastly is a Bath and Body Works Wallflower and unfortunately I cannot tell you the name of the scent because I can't remember. I never pick up anything that's not beachy or Leaves though so it's definitely a beachy scent :) I liked it a lot but am excited to try something else. 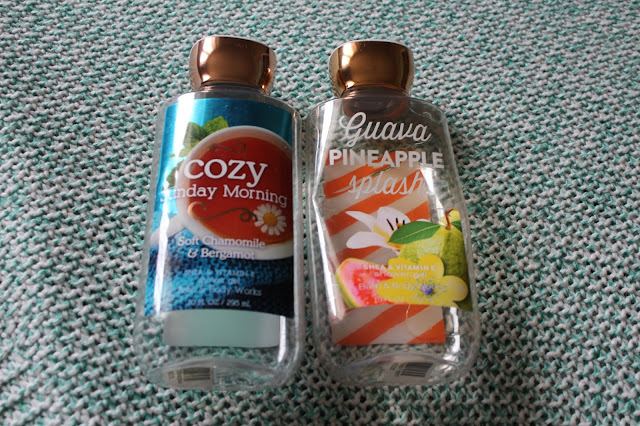 Two shower gels completed this month. I absolutely HATED Bath and Body Works Cozy Sunday Morning. I had to force myself to use it up because it smelt terrible to me. I know I could've just thrown it away but I wanted to finish it up and be done with it. I have learned my lesson and will never pick this up again!
Guava Pineapple Splash by Bath and Body Works was a fruity scent and just fine for shower gel. I probably wouldn't repurchase in the future just because I have other scents I prefer but it was nice! 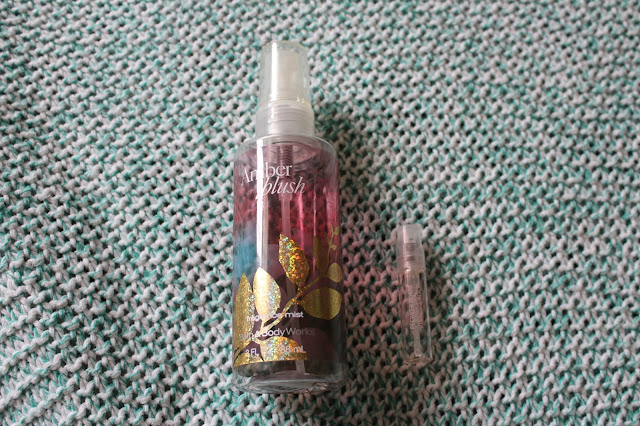 Two sprays this month- the first is Bath and Body Works Amber Blush which I liked. I wouldn't repurchase just because I have other scents that I need to use up and want to try but I did really like it.

I also used up a sample of Flowerbomb which I have in full size and love! 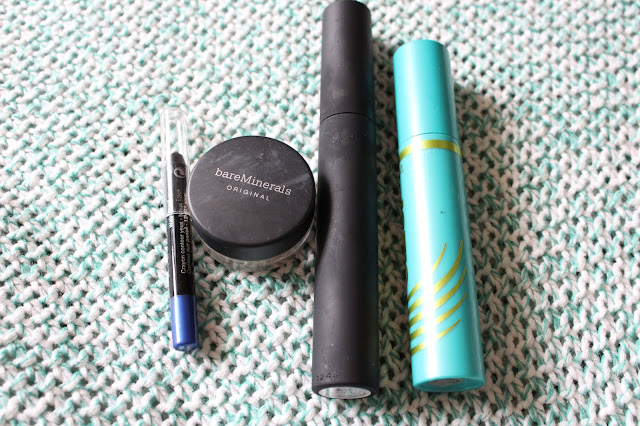 I can't believe I have four makeup products to show you this month.

The first is a twist up blue eyeliner from Sephora which I really liked. The color was really pretty and I'm disappointed to be done with it. I have a lot of other eyeliners to get through before I would repurchase though and I may want to try other brands.

The BareMinerals Foundation sample was my favorite and I need to purchase a full size of it! I am so bummed I got to the end of it!

Two mascaras for you- the first is Pur Fully Charged Magnetic Mascara and I hated it. It was so clumpy and gross I could barely use it. It's technically not empty but I'm calling it that because at this point it's basically unusable it's so clumpy.

The second mascara is Covergirl Super Sizer and I did really like this. I'm not sure I would repurchase it in the future though because there are other mascaras I want to try and others I definitely like more. 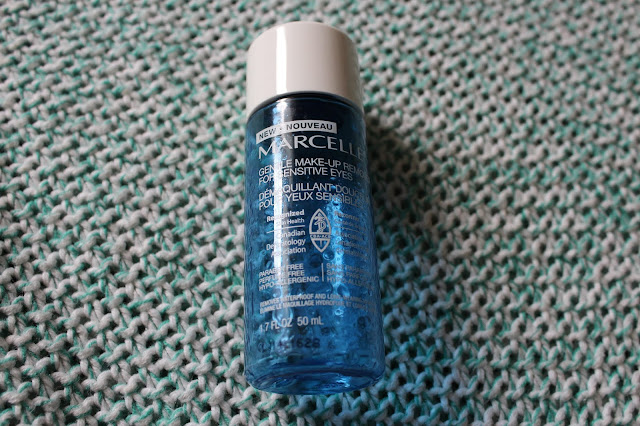 With all that mascara I used my Marcelle makeup remover for sensitive eyes and I really liked this and would consider repurchasing it in the future. 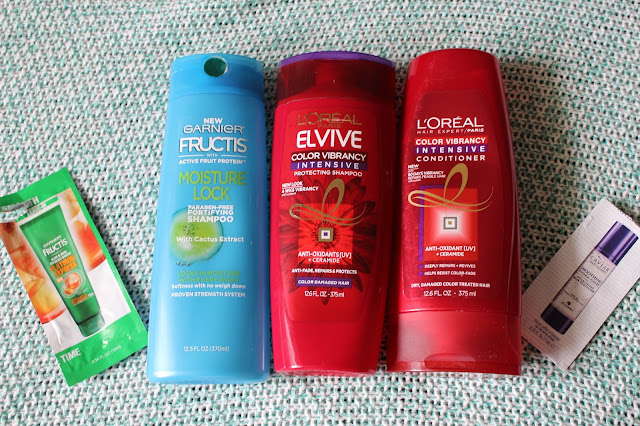 The Garnier Fructis Flat Iron Express was nice and I could see myself buying a full size to use in my hair!

The Garnier Fructis Moisture Lock Shampoo is one of my favorites and I will definitely repurchase it in the future.

The Loreal Elvive shampoo and conditioner are really nice and moisturizing! I found they did great things for my hair and would definitely buy them again in the future.

The Caviar Hair Gel was okay- nothing special and I'm glad I got this sample out of my collection. 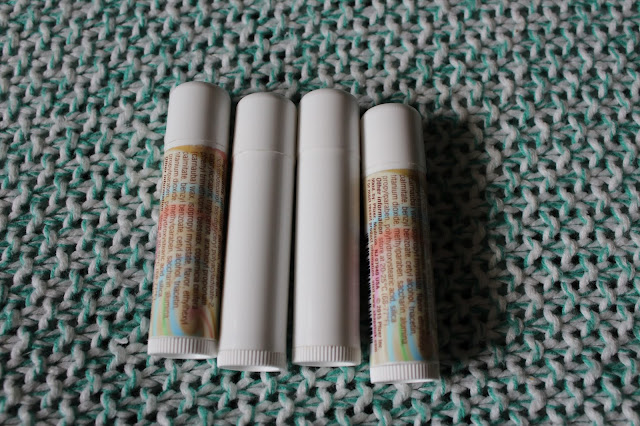 Four chapsticks this month- three in cake batter and one in candy cane. Cake batter is still my ultimate favorite and I just repurchased a 20 pack from Amazon! 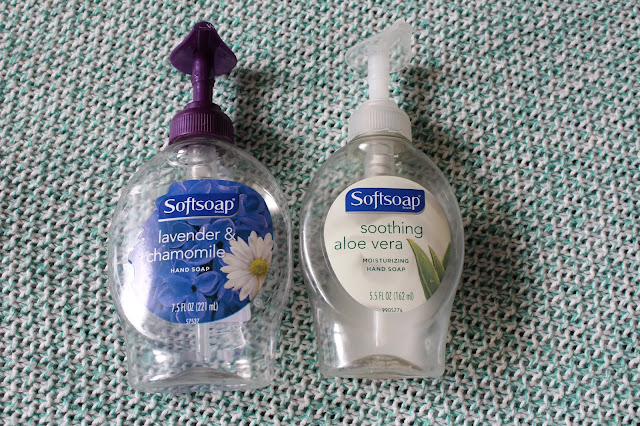 Two hand soaps are completed, both from Softsoap. The lavender and chamomile is okay but definitely not my favorite. The Soothing Aloe Vera smells really nice and is very creamy but I definitely would repurchase it in the future. 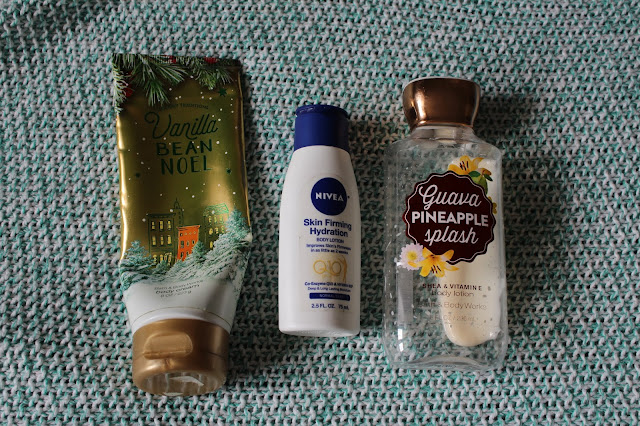 The last category is lotion and I finished up three this month.

The first is Bath and Body Works Vanilla Bean Noel. I am so sick of this scent and I will never purchase it again from Bath and Body Works unless it's in hand soap form. I can't deal with the fake vanilla scent with lotion and shower gel anymore. I'm so glad this is out of my collection but I think there may be one or two more hiding in there that I need to get through...

The Nivea Skin Firming Hydration was a lotion I kept in my drawer at work and it was amazing. It was so soft and soothing and made my hands feel great I would definitely consider repurchasing this in the future.

Lastly is Bath and Body Works Guava Pineapple Splash which I also used up the shower gel as you read above. I liked it, it was fruity and nice but definitely not my favorite compared to other scents so I would repurchase others before this one! 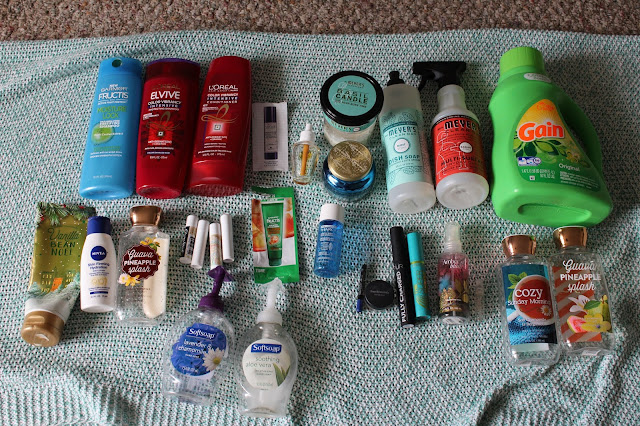 That's everything! I hope you enjoyed and let me know in the comments what you finished up this month!
Posted by Melissa at 12:44 PM