We are officially in April you guys! While we did enjoy some lovely spring weather this weekend we are going to go back even further to day 7 of our cruise when we enjoyed some lovely 80* weather in
St. Lucia!

Now we arrived in St. Lucia early in the morning and Tim and I went to eat breakfast as we were pulling into port. We only had plans to wander around on our own on this day but when we looked from the deck it appeared that the port was very isolated from everything else. We quickly ran downstairs to the excursions and asked if we could book the rainforest trek and were told yes!

Norwegian is great about getting you on excursions at the last minute if it's a possibility. After booking our excursion we quickly got off the boat and headed over to our designated meeting area. 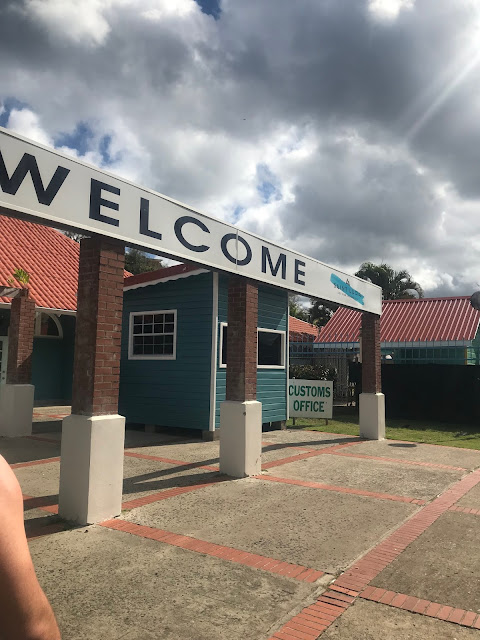 St. Lucia's port was one of my least favorites. There were a few stores but beyond that you had to walk pretty far before actually getting to anything and all the touristy places are far away from the port so there's not a whole lot to do in the immediate surrounding area. 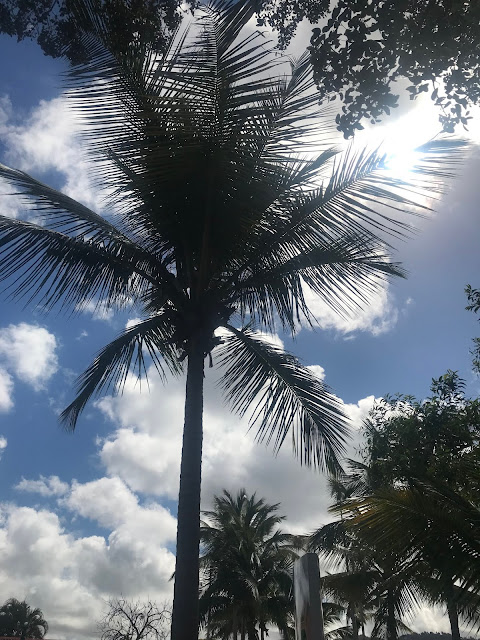 On our drive to the rainforest we could see that we had made the right decision because there was truly nothing but houses on our drive. Our driver knew the roads very well but it was still a wild ride as we drove in the mountains on roads that only fit one car at a time. It was very hilly and there were a lot of sharp turns where he would beep before getting close in case another driver was coming towards us.

When we first arrived we were introduced to our guide who took us on a short hiking tour of the lower rainforest. He showed us the differences between the trees and gave us some local tips about how they use certain plants as remedies. 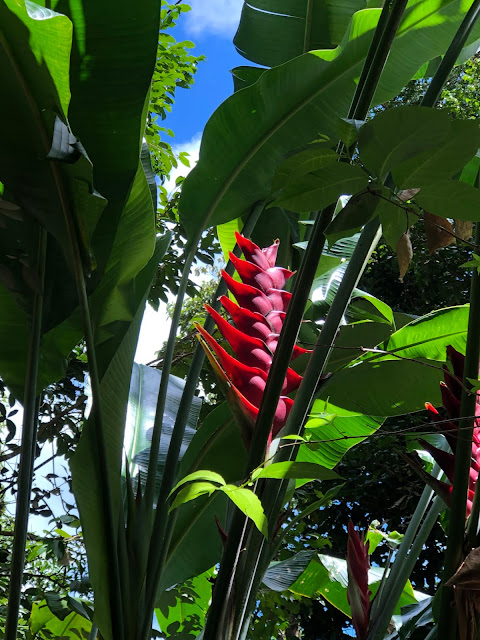 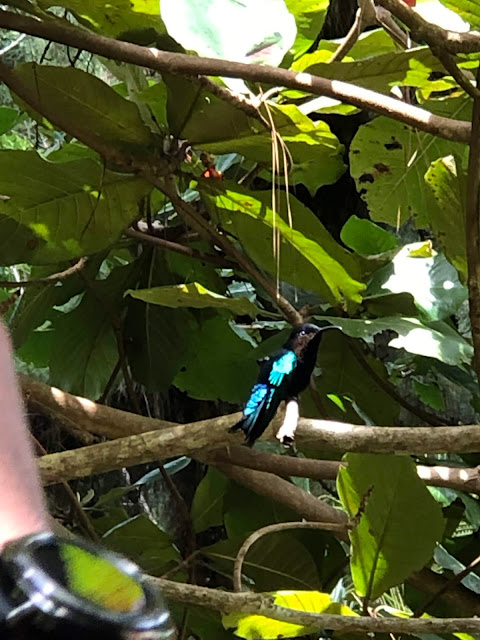 Our guide even was able to coax a hummingbird close to our group. There were tons of hummingbirds in our vicinity and it was very unexpected to me when we first saw them. We were told there weren't any large mammals in the rainforest of St. Lucia but there were a ton of birds, insects and reptiles. 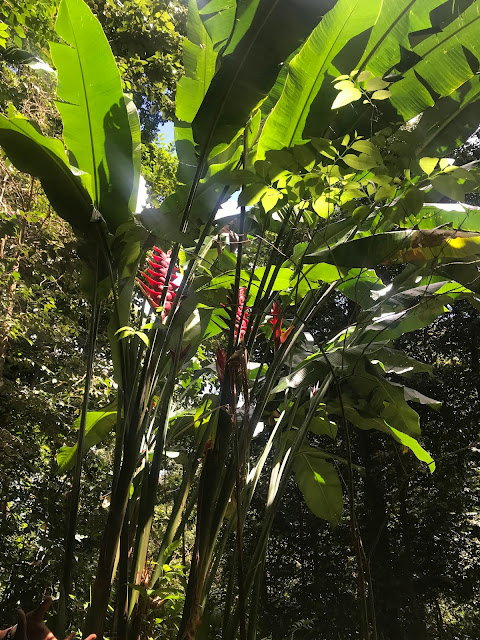 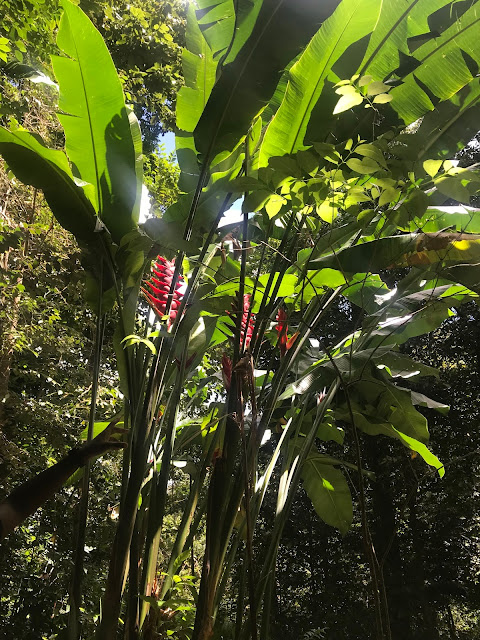 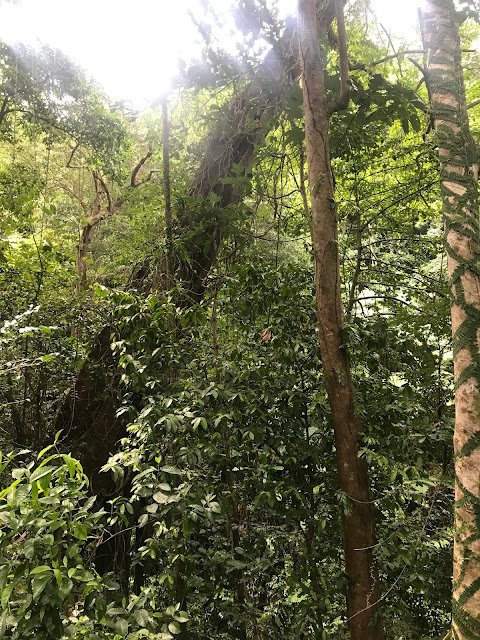 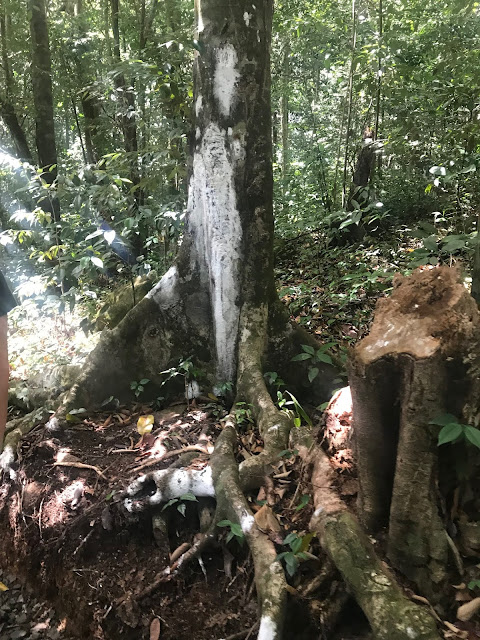 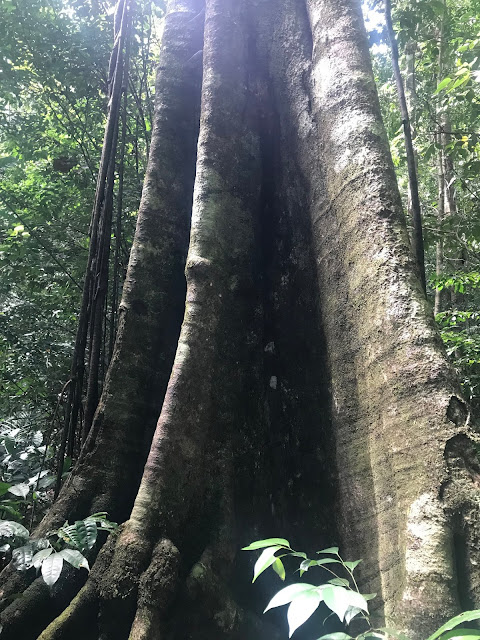 Many of the trees were so massive it was unbelievable. We also learned about the vines that will strangle trees so they can get to the sunlight in the dense forest. 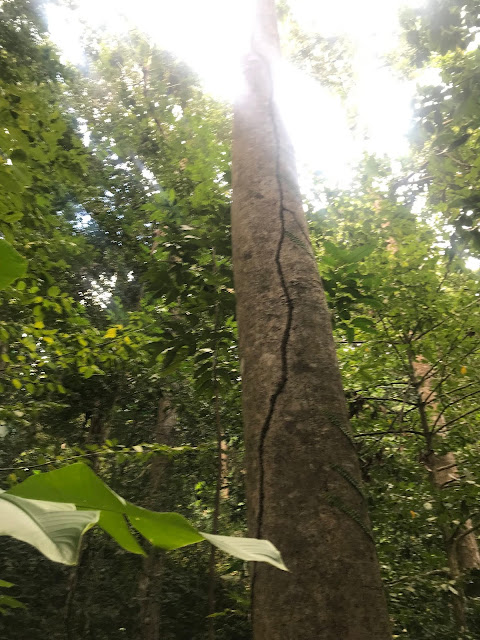 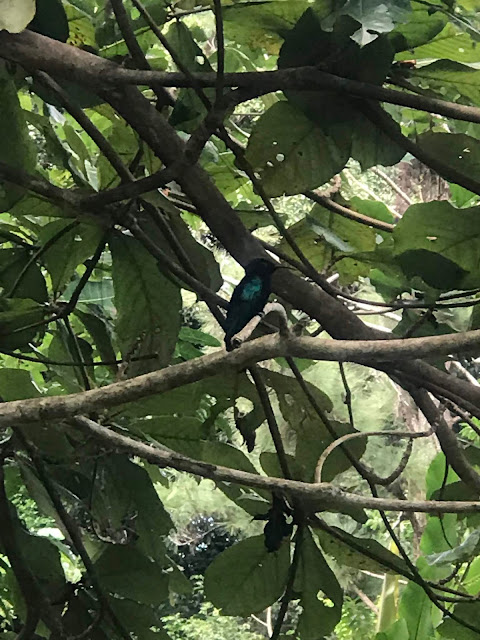 The aerial tram ride was great! We boarded with our guide and he continued to educate us on the rainforest but there were many times when we were just silent listening to the sounds of the forest and looking around in awe. We climbed through all the layers of the forest to the peak and then the tram turned around and we had some beautiful views of the island. 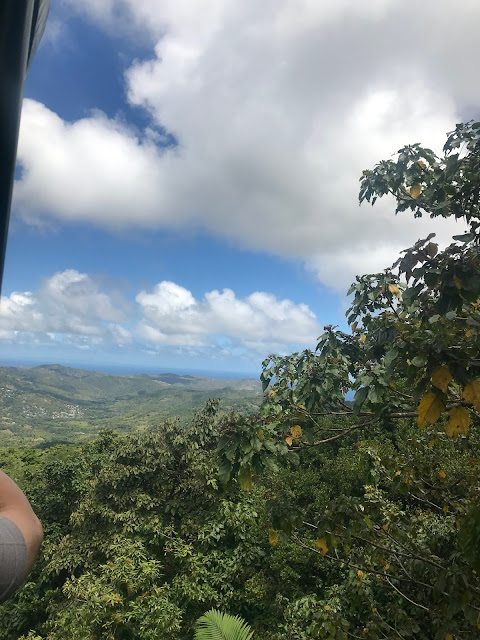 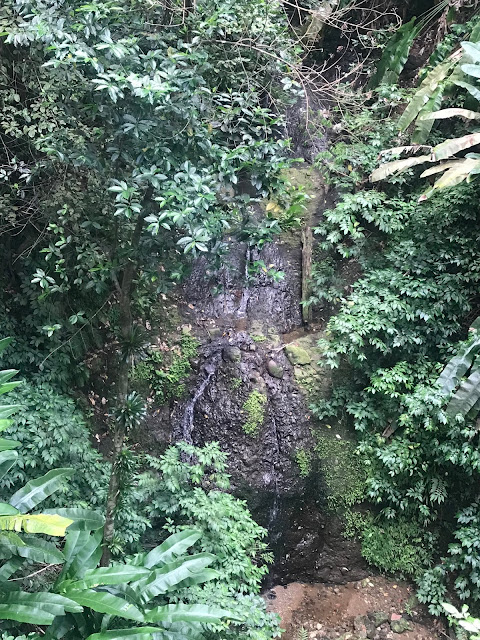 Now, if you are fearful of heights I would certainly not recommend this excursion but if you aren't it's a wonderful adventure! The tram itself moves very slowly so it's not a scary ride at all even though they warn you it doesn't follow U.S regulations. I felt very safe the entire time. 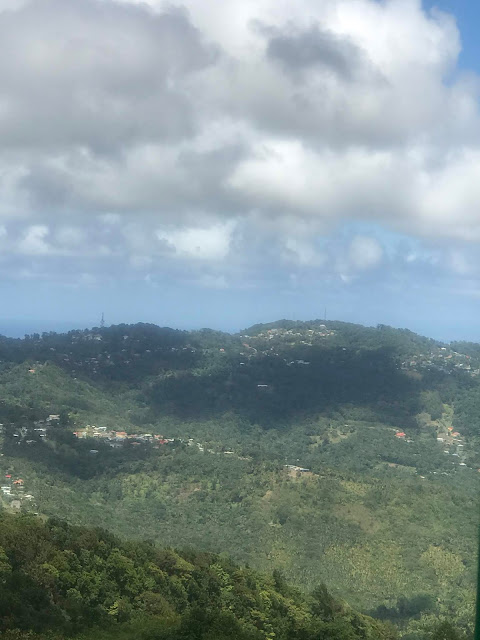 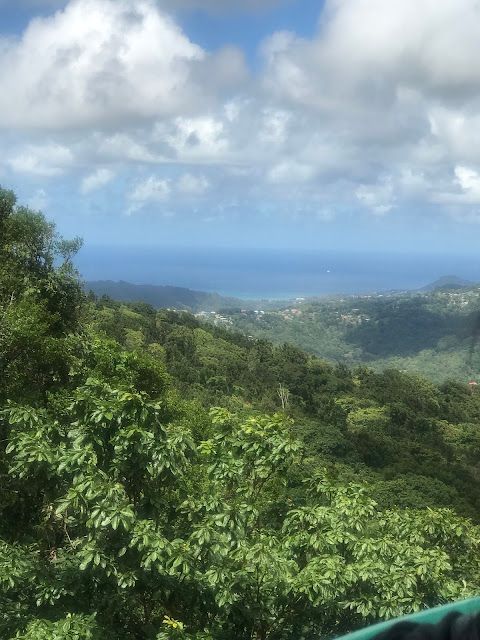 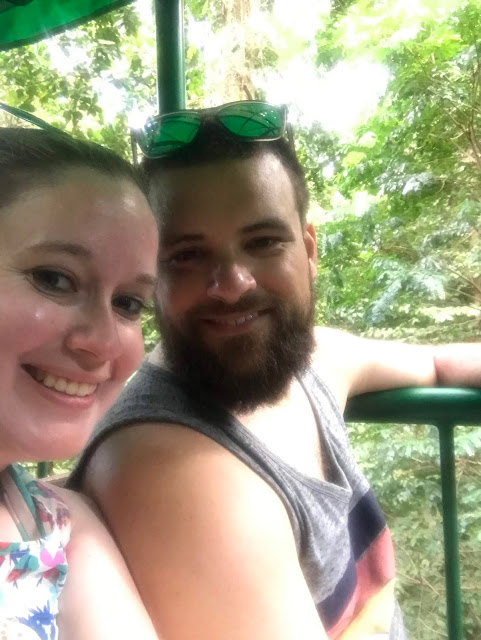 It was definitely a laid back activity where we didn't have to exert a ton of energy which is what we needed with our fresh sunburns from the day before.

After our tour was complete we had a local drink that was complimentary and delicious and then walked around the gift shop. Once our bus was ready we hopped on and headed back to port. 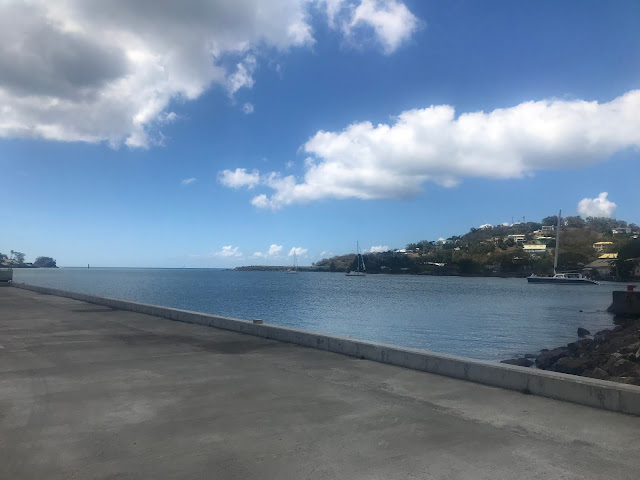 After going in a few stores we decided to get back on the ship. Honestly, if you are stopping in St. Lucia with a cruise ship I highly recommend you book an excursion or find something not connected to the ship that you take a taxi to. We saw a ton of people get off the boat, walk around and then get right back on. There was truly nothing in the immediate surrounding area. 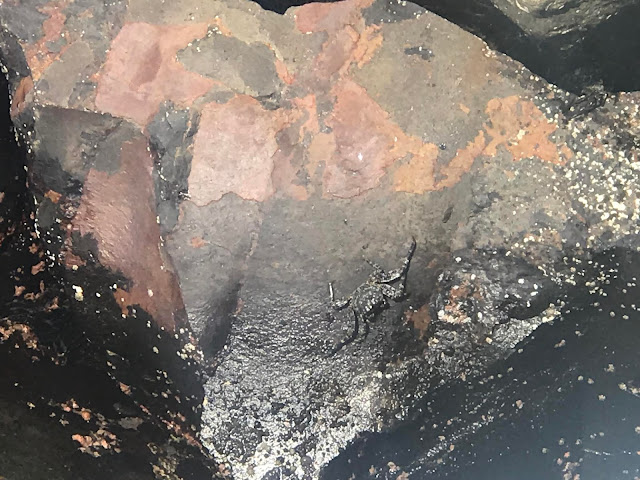 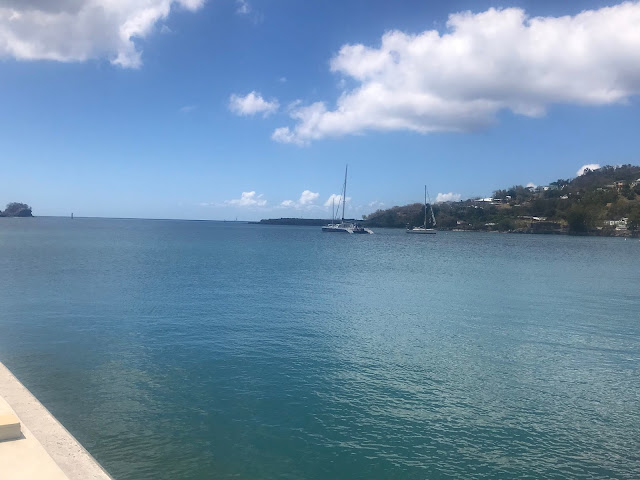 St. Lucia was truly nothing like I expected. It is such a different vibe from the other islands on our cruise since it was a lush island. All the others had a more beachy vibe but this one was truly a dense rainforest.

St. Lucia has the worlds only drive in volcano which we would have loved to have done but it was very far away from the port and would have been cutting our day very tight. We have added this island to our list of places we would like to visit again in the future. 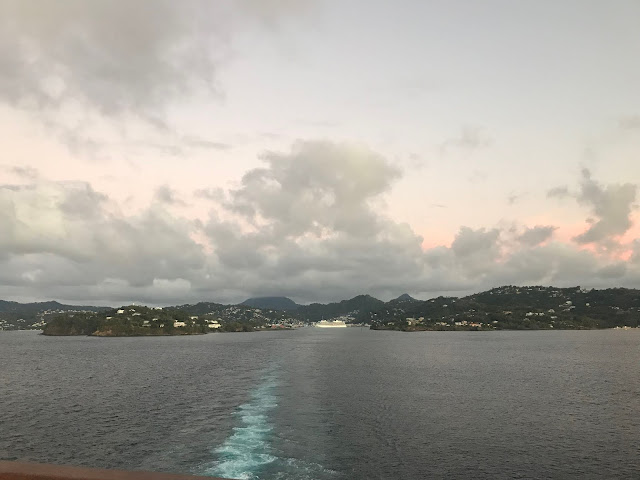 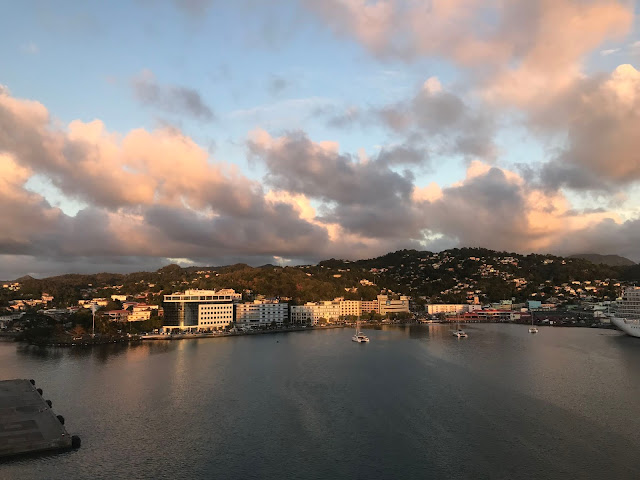 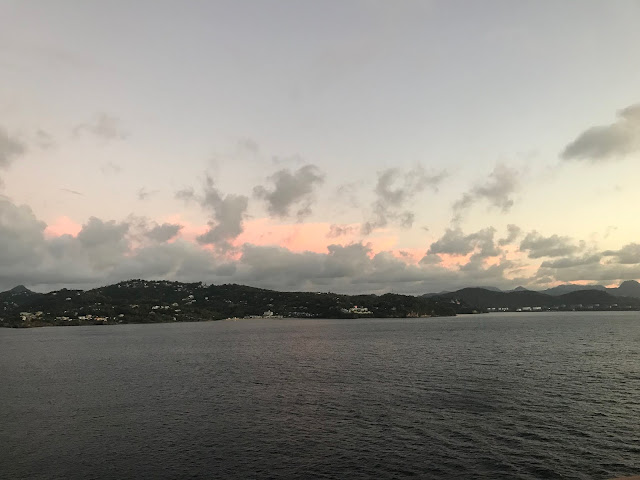 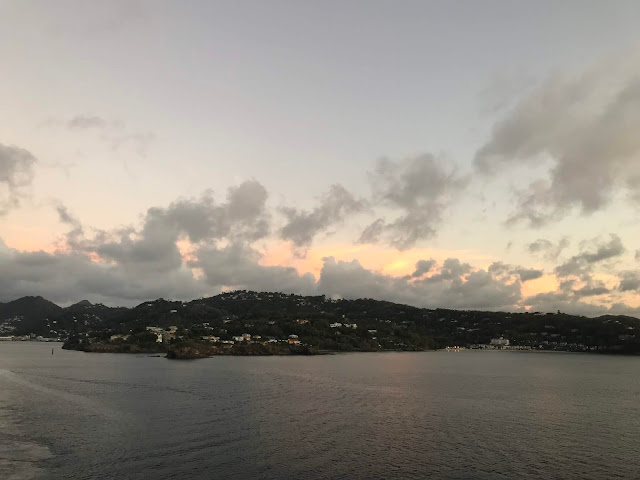 We watched as we pulled away from the island again which is one of the most magical things to experience. I loved looking at the scenery each night as we left the island and thinking about how we only explored a small area. 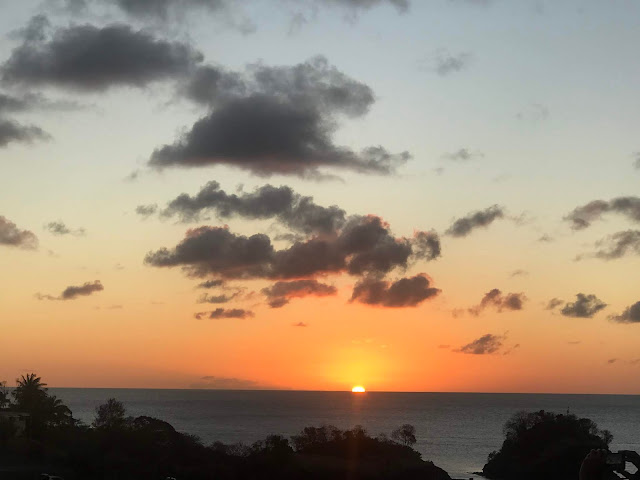 The sunset was magnificent again, every night was so beautiful! 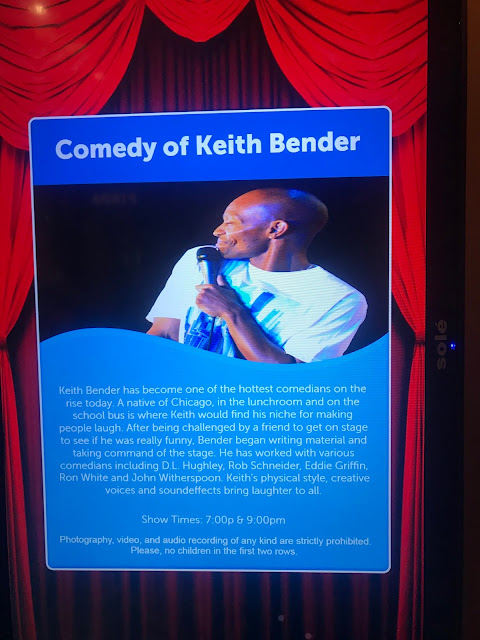 That night Keith Bender was the comedian performer. He was hilarious and we really enjoyed his show!

We also went to the game show This or That afterwards and although we didn't win we enjoyed it! 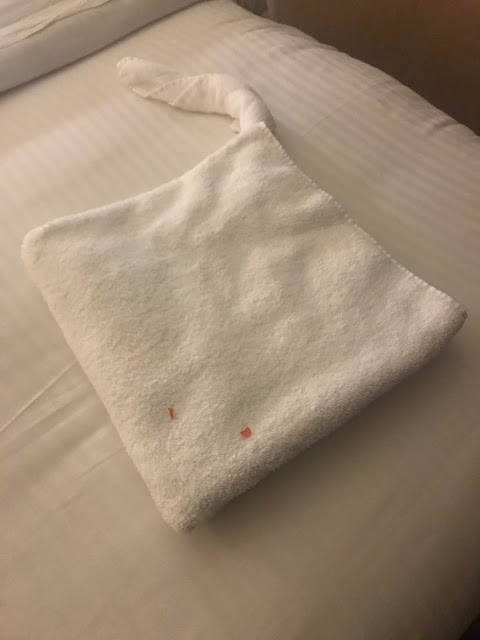 We arrived back to our room to this cute stingray! Then it was an early bedtime for us since we had a super exciting adventure the next day in Antigua!