Guys. I think I have an unhealthy obsession with lists.

While scrolling through my phone I realized between my lists for the new house, my to-buy lists, and everything else I jot down it's something that I should discuss here on the blog. I do everything from using the notes section on my phone, using the app Evernote, and making lists in cute notebooks.

Here's an example of the shopping list I currently have in my phone: 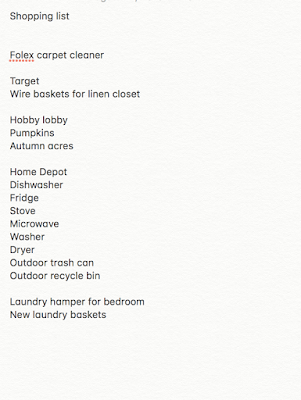 As I'm shopping if I see something I like I'll jot it down if I'm not ready to buy it yet.  Right now I'm thinking of many things that I need to buy for the new house but I can't buy them until we have a place for them to go.

I also organize lists of books to read and tv shows to watch. If you saw my list of lists you would think all I do is make lists.

Do you guys make lists in order to stay organized?
Posted by Melissa at 6:50 PM