Tim finished a huge section of our fire pit recently! Before I show you what it looks like now, we have to flashback to what it looked like before... 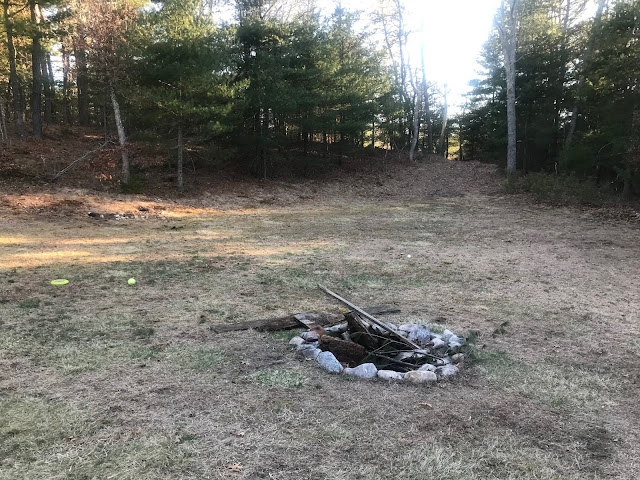 This is the fire pit we inherited when we bought the house. Clearly a DIY half thought out fire pit. It worked but wasn't very pretty looking. Since we had extra pavers after the walkway project Tim got to work building a new fire pit where the old one was. 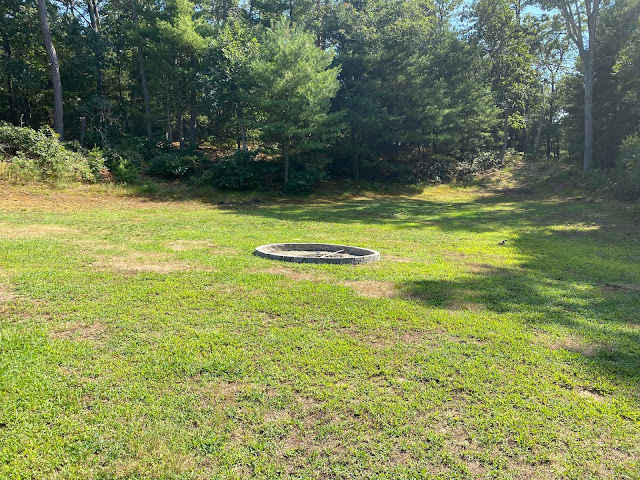 We wanted the fire pit to be larger so we could easily fit a pallet on top if we wanted to. Also since they were bricks and not fire pit pavers, it was a bit harder to line them up. (I mean, I didn't do anything...it was ALL Tim...but I did practice lining them up before we actually started and it was difficult).
The pavers Tim used were these ones. They look great and we bought them when they were 25 cents a piece which was a great deal! Tim used Loctite to glue the pavers together. 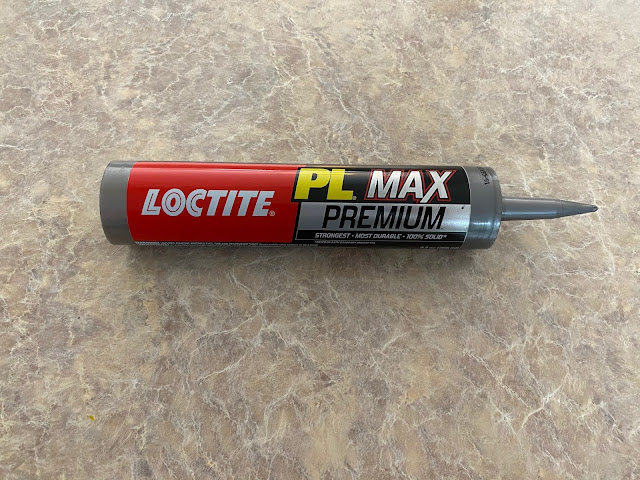 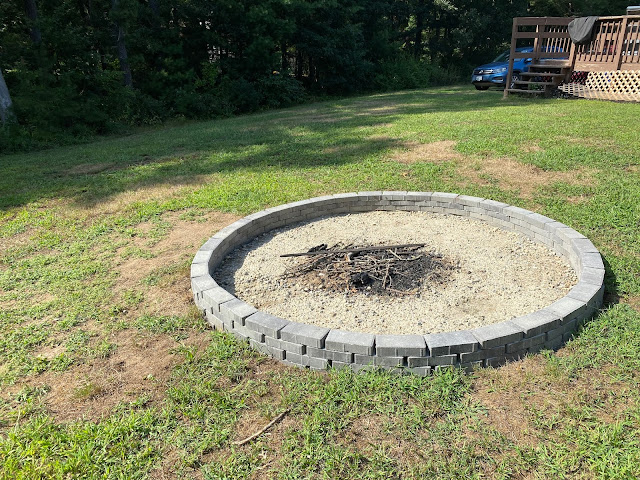 We also had crushed gravel left over from the walkway project so really the only cost was the glue to put this together. However we will be adding a steel bottom to the fire pit and adjusting this slightly because after finishing this Tim announced that pavers can explode due to heat. Scary stuff that we didn't realize before starting this project! We will get the steel insert and then surround the fire pit with white rocks. I really wanted to get Adirondack chairs ordered this year but I cannot find the cheap plastic $20 ones anywhere they are all sold out! So for now we will get the fire pit all set up and next spring I will order the Adirondack chairs.
Here is an inspiration picture for what I want it to look like next spring. 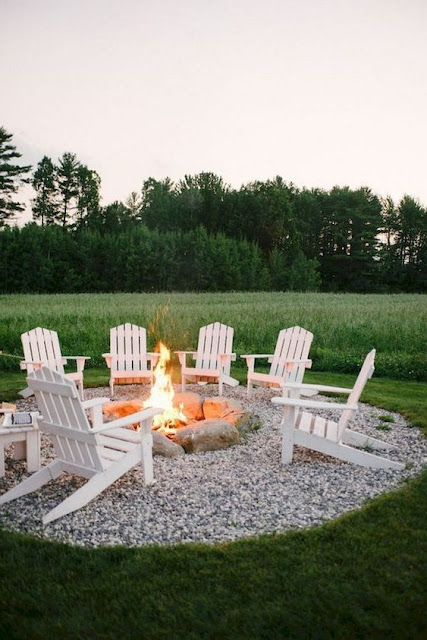 Source
Obviously our fire pit won't have expensive Adirondack chairs and it will be brick based instead of huge rocks but I love the white rocks and white chairs. I may go with a different color though, I'm not sure yet! 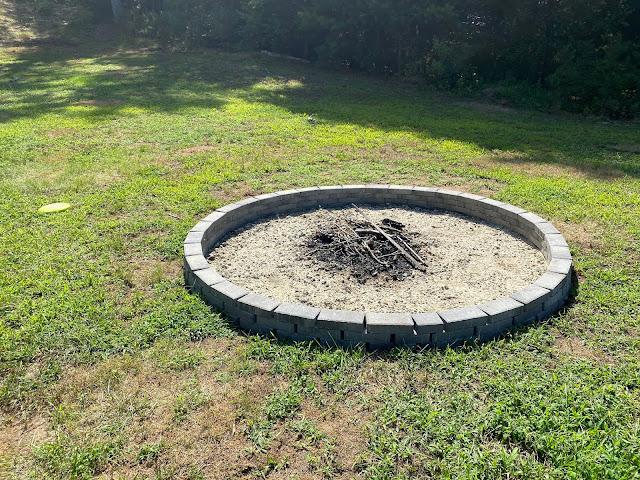 I just love how it turned out! I'm lucky that Tim is so OCD and is very precise. He really takes pride in these projects and they end up looking so amazing! I know it's not his choice of weekend entertainment but I love when he works on projects around the house. 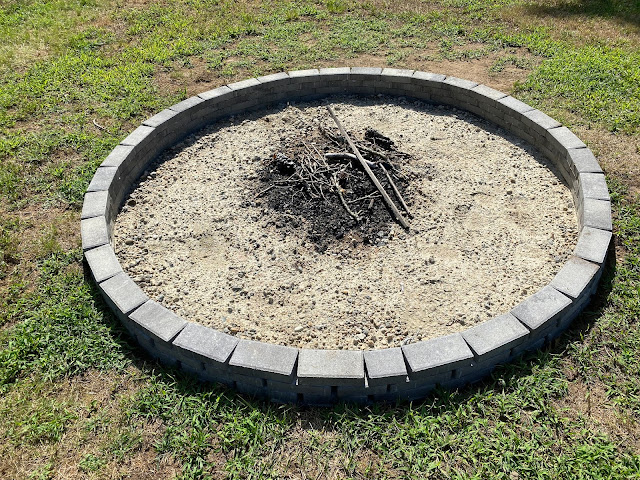 So, still quite a bit to do, but this is shaping up to be a great backyard hangout area! I can't wait for some chilly fall nights by the fire pit!
Do you have a fire pit? Have you ever built a DIY fire pit? I want to know what your backyard looks like, what features does it have?
Posted by Melissa at 2:00 AM No comments:

You guys, I finally ordered some solar lights to light up our front walkway! OneFrugalChick on Instagram posted a deal for Amazon for these solar lights and I was able to snag them for only $13 a 6-pack! I ended up needing 18 lights total so buying three packs worked out perfectly. Although I wish they were more of a white light instead of yellow I am thrilled with how they look for such a cheap price! I had been previously looking at Walmart for clearances out lights but they still weren't getting clearanced out. I was so happy to find these because I knew I wanted to get some in the garden before summer ends. 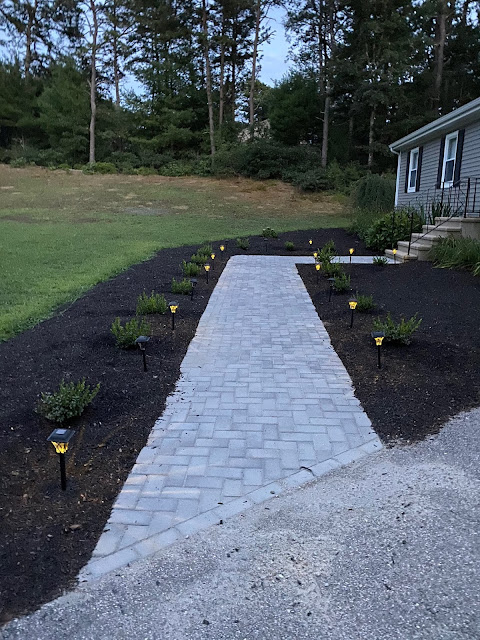 The other night I noticed that the lights were starting to turn on one by one at twilight (ayo Twilight fans) so I headed outside to snap some pictures. You can see that some of the lights haven't turned on yet but I love the gentle glow they give off! 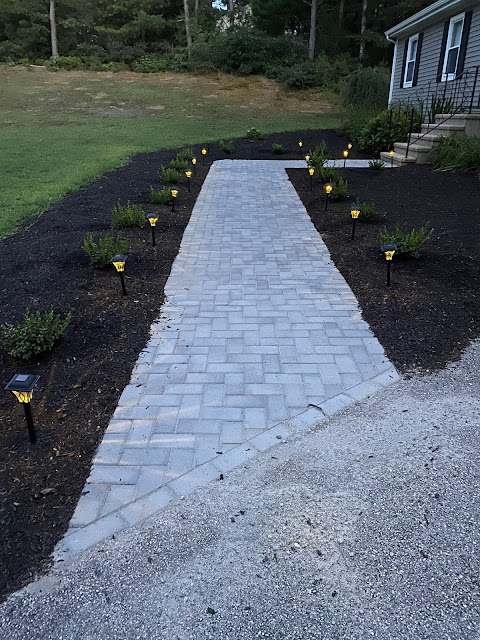 Also, the walkway is looking great! A round of applause for Tim on that one! 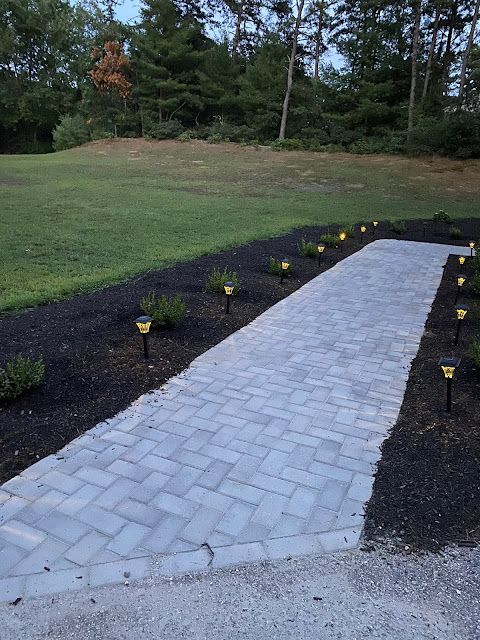 I think at this point I was just waiting for two or three lights to turn on. They are just enough to give off light if you are coming up our walkway. I'm picturing pumpkins lining the walkway this fall, leading kids up to the door for Halloween. If there is Halloween this year, who knows at this point! 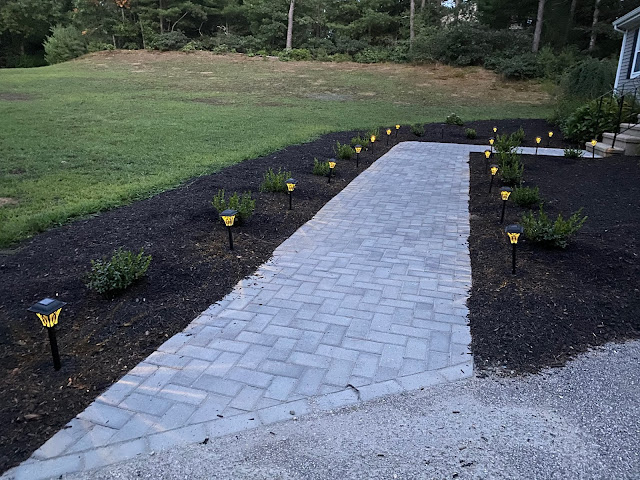 One more light to go! If you head to my instagram (balancingonmytoes) in my home story I have a little video of walking down the walkway towards the house. You can hear the nighttime sounds that we get here in Rhode Island. I love the sound of summer nights here, it's so peaceful with all the wildlife sounds. I love where I live! 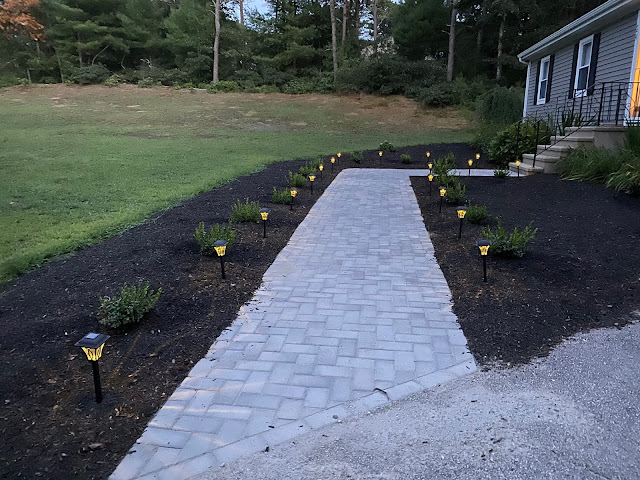 When all the lights were finally on I was so happy! It just looks so nice! 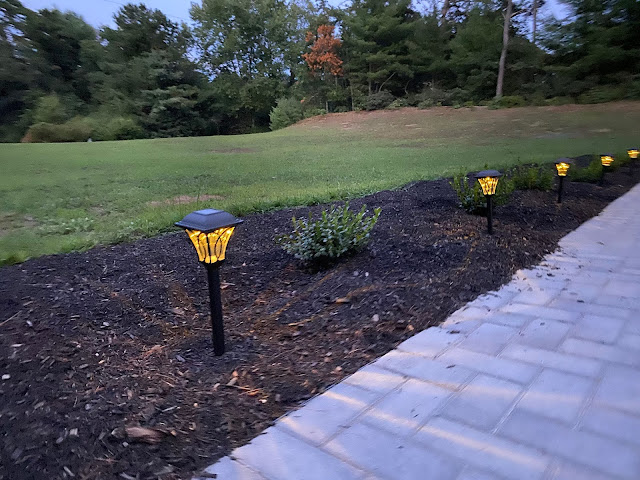 These lights are plastic, not glass. I know that may make them "cheaper" but I personally like that they can get bumped around and knocked over and aren't going to shatter. Mostly I prefer things that aren't too precious.  I worry less about Sophie running around like a bull in a china shop when things aren't breakable. 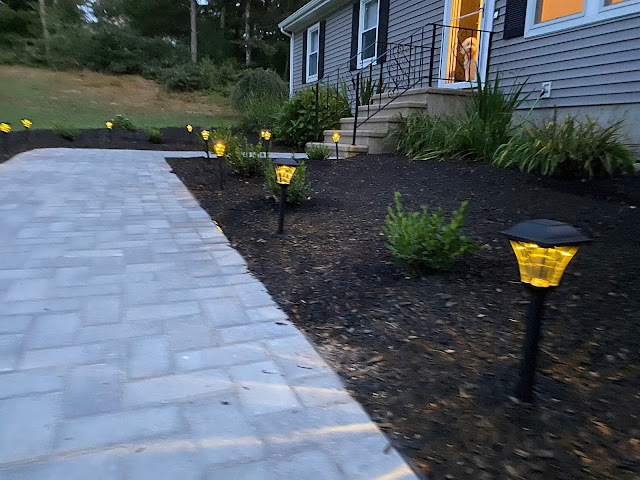 Look at that precious little face in the window! Also, this just reminds me of how far we've come. There were very few gardens, no walkway, no evergreens. We've come so far in such a short time! 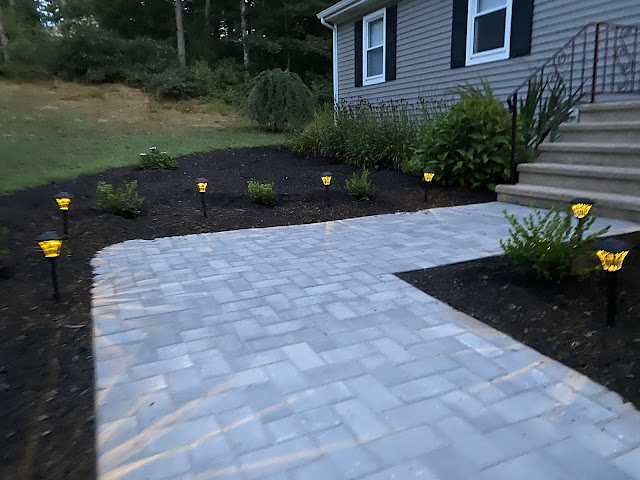 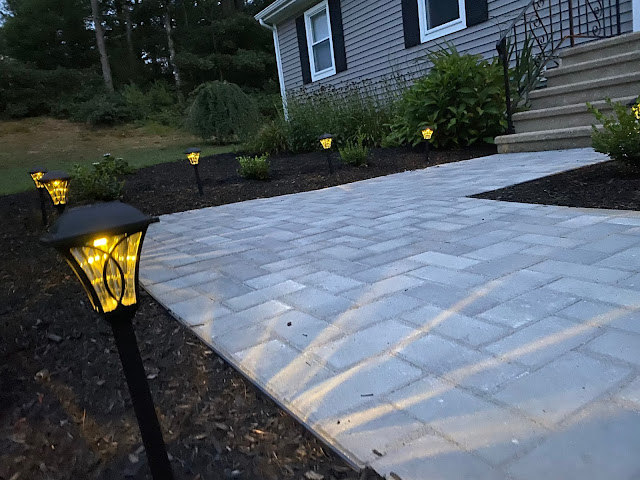 The design on these lights is so pretty too. Look at the glow it sends across the walkway.
Okay, that's all for my new solar lights! What sort of outdoor lighting do you have at your house? I would love to add some solar lights in the backyard too, but we are still working on our plans for the backyard so we will see what we end up with back there. Tim recently finished part of a project he's been working on and it looks so good, I cannot wait to share it with you all.
Also, I am going to work on my plans for this front garden for next year....and what other plants and plans I have for the yard next spring. Oh, the projects just keep on coming to me!

Posted by Melissa at 1:00 AM No comments:

Getting real today!
Our guest bedroom is nothing special. The furniture in it is the furniture I grew up with in my bedroom. The mattress is on the floor and it's Tim's old mattress (although super comfortable!)
I store my vacuum fleet (yes, I have more than one vacuum and I want more...) in this room. The decor is just kind of thrown in there.
So yes, nothing special. But to be honest we haven't ever hosted anyone in this room. This is a three bedroom house and when we turned one room into an office, we set up the second bedroom as a guest room. Eventually if we have kids I imagine this becoming a nursery. But for now it's just an extra bedroom in case someone spends the night! 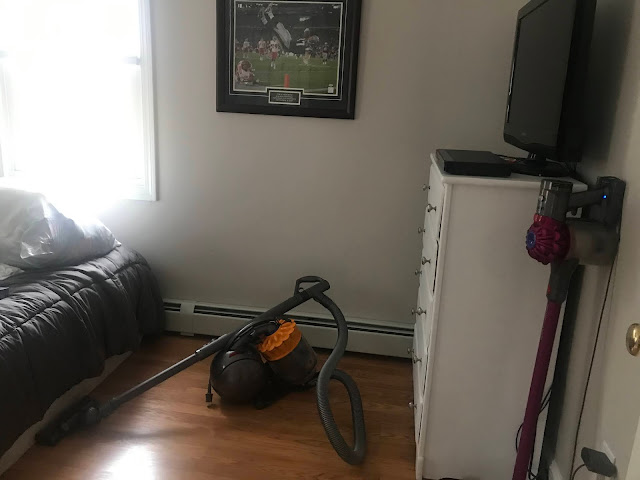 When you first walk in the door you see the dresser with the tv and DVD player on top and my vacuum fleet. Also a signed Gronk picture that is making me a little sad lately. 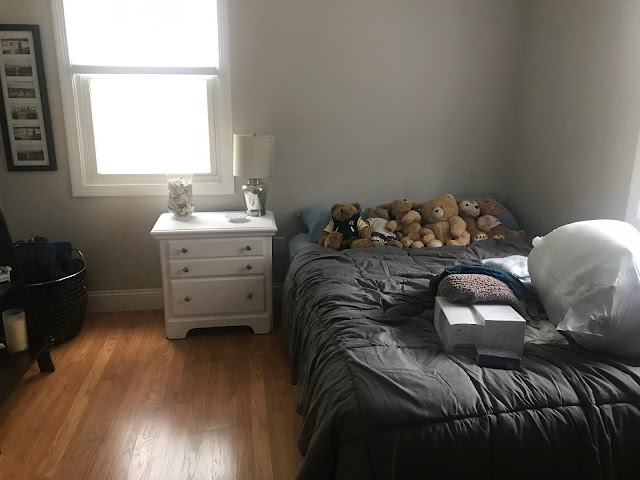 As you can see this was just a typical day where I didn't clean up for you for pictures. #keepingitreal
Donations and items listed on poshmark were just sitting on the bed. 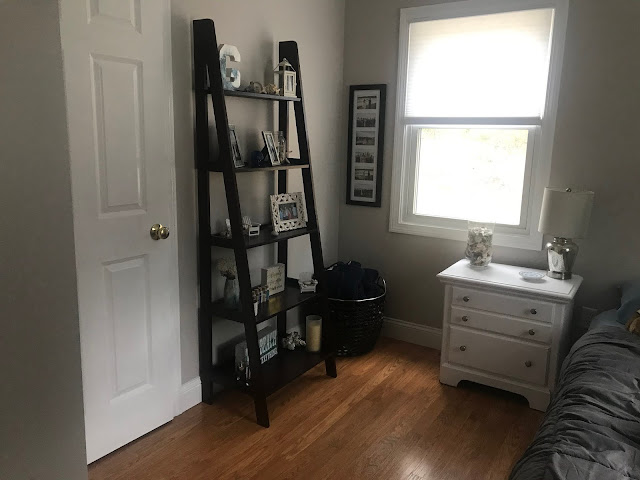 I love this ladder bookshelf but there just wasn't room for it in our living room so I stuck it in here. Maybe if we renovate someday or if we move it will fit out in our living room again. Do you keep furniture even if it doesn't work for you currently? 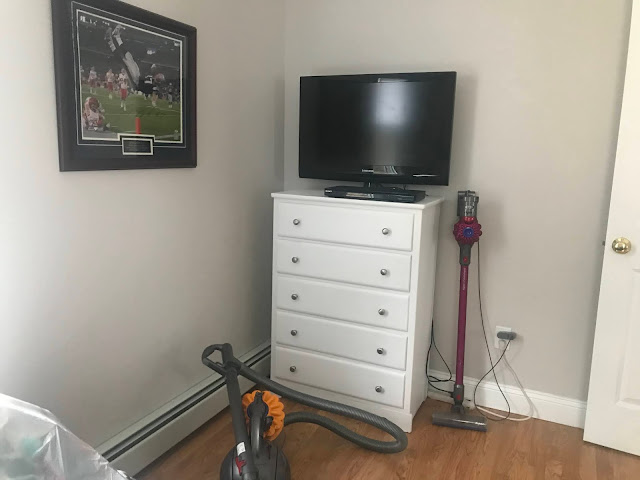 A look back towards the door. So, as I said at the beginning...nothing exciting! But this room is basically filled with things that didn't work elsewhere in our home.
Do you have a guest room in your house? How often does it get used?
Posted by Melissa at 2:30 AM No comments:

Hey everyone!
Today we are talking about our kitchen! If you've been reading along you might have noticed that I'm slowly sharing with you each room of our house. Our kitchen is used daily and along with the living room is the place we spend the most time.
When we first moved in we immediately painted the cabinets and then bought new appliances. Here's what it currently looks like: 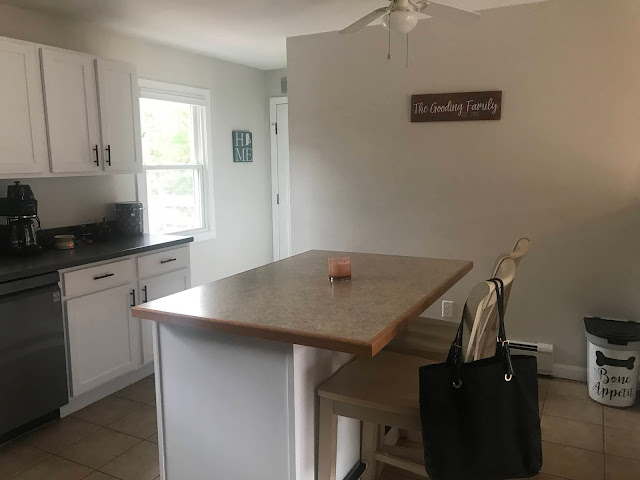 Our island is where we sit to eat all of our meals. There isn't room for a kitchen table in our house currently so we spend our meals at the counter. In our apartment we sat on the couch so at least this is a step up!
Eventually we would like to replace the countertops and floors. I could see us also redoing the entire kitchen if we decide to make this our forever home. For right now it works just fine but seeing a quartz countertop would be so nice :) 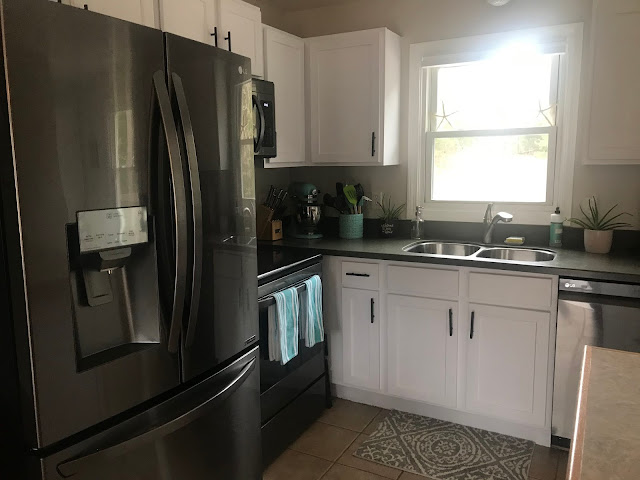 I love the appliances we picked. Tim was the person who actually pointed them out. I was so set on getting stainless steel but I never thought about the black stainless and I honestly like it better. It looks so good with the white cabinets. We have loved our LG appliances so far and I would definitely pick them again in a future home! 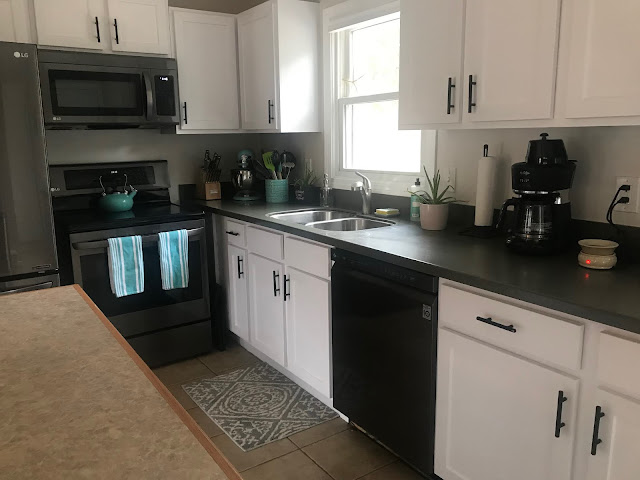 All of our KitchenAid supplies and other teal decor is my favorite! How nice would it all look with a grayish quartz countertop on both the regular counter and the island?! 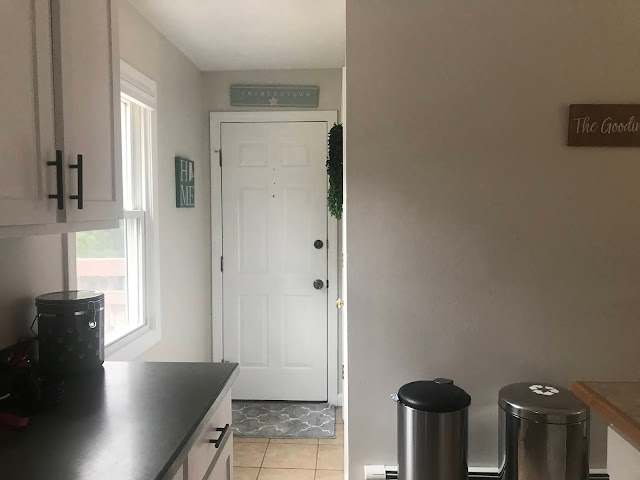 This is the main door we come in and out every day. I really love how homey it feels. As many improvements as I can come up with, I love this being our first home! I know we will probably outgrow it someday and need to make a decision whether to add on or move but I do love coming through that door into our home every day. Especially when a little furry face greets me :)
What is your kitchen like? Do you have any big plans for it?
Posted by Melissa at 2:00 AM No comments:

This weekend I made a delicious pasta dish that I discovered on Pinterest. You can find the original recipe here. 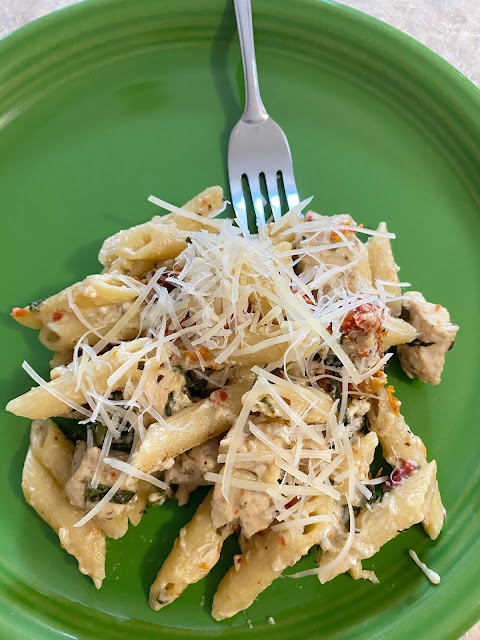 I ended up choosing the stovetop version because to me that seems to be the most fresh version but I'm sure that the slow cooker or instant pot version is great as well! I was nervous to try this recipe because I don't really like greek yogurt or cottage cheese but honestly you can't even tell that either of those ingredients are in there.

Now I stuck pretty close to the recipe from My Crazy Good Life but I did change things a little bit, so I will share that here. 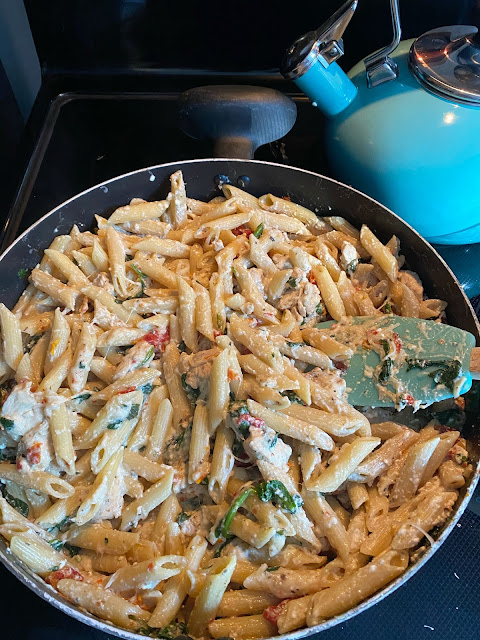 Directions
I'm so glad I discovered this recipe from My Crazy Good Life! I will definitely be making this again because it's both healthy and delicious!

Posted by Melissa at 2:30 AM No comments: