Since I've been documenting my fertility journey here on the blog, I thought I would share my HSG procedure that I had done yesterday in case anyone else is in the same boat. I know that I read everything I could find on HSG and also watched a ton of YouTube videos that scared me to death before the procedure but you may want another opinion on the procedure....so here is my experience. 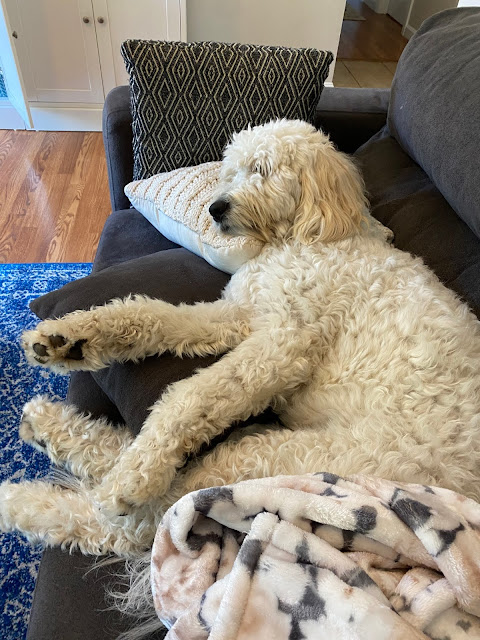 Here's a picture of sleepy Sophie to make the mood a little lighter.

Anyways....my test was set for 11:30 yesterday morning and I was told to arrive at 11:15 to check in. My test was at the local hospital in their diagnostic imaging department so I checked in with the front desk, received my sticker for not having Covid-19 symptoms and then directed to diagnostic imaging.

I was checked in, given my hospital bracelet and was directed to a different waiting room. Within 10 minutes I was called back to an imaging room that reminded me of a surgical room that you see on tv shows. I don't think I've ever been in a room like that in my lifetime since I haven't had any surgeries or any testing like this before. There were two medical assistants who directed me to put on two gowns, one facing forward and one facing backwards (seriously how they not have come up with a better solution yet?) and once I came out of the bathroom it was only moments before the doctor came in to get started.

The doctor I had was very nice and explained the entire procedure, showing me the tools that would be used during it. He also showed me the X-ray machine and explained that they would need to call an x-ray technician in because he was not the machine guy, he was the down-low guy which made me laugh.

Once everything was ready I was told to hop up onto the table. Now, at first it was not much different than going to the gynecologist for a yearly appointment. The speculum was used which was normal, and then he did three swabs. One of the medical assistants came over to hold my hand and I told her I was fine because none of that hurt in the least, it just felt like pressure.

The next part was extremely painful for me. He inserted a tube inside me and it felt like he was blowing up a balloon inside me. It was the worst cramping pain I have ever felt in my life. I have never had period pain as bad as this hurt and it was uncomfortable while we waited for the x-ray technician to come to the room.

They moved the X-ray machine over my stomach and the gynecologist inserted the blue dye inside the tube. Again, this felt like a balloon exploding inside me. I squeezed that poor medical assistants hand as I tried to breathe through the pain. It was over fairly quickly and I was then told to sit up on the table so the doctor could show me the X-ray pictures.

Now, let me just say that the Fallopian tubes look nothing like you see in diagrams. They are super thin! He showed me how the blue dye moved through the tubes and pooled which means everything is normal.

I also received word that some of my levels in my blood work were slightly elevated. I have to return for blood work next month.

I spent the entire afternoon curled up on the couch with pain that only subsided if I was completely still. I struggled getting up to go to the bathroom and didn't want to much of anything. Luckily I can currently work from home in a reclined position!

I am feeling much better and the pain eventually did subside but yesterday was really rough.

Now, if you are going to have a HSG done keep in mind that it seems like the pain varies person to person. I read accounts from women who said they only felt uncomfortable and I've also read stories where women said it hurt more than going through labor. I certainly don't know if that's true, but I do think that it was the most painful experience I have had thus far. I don't say that to scare you, because please don't be as scared as I was going in. The good news is that it's over quickly and though the pain lingers it seems to only last a day.

So, that's where we are in our infertility journey. Hopefully I will have more news soon!