Todays post is extremely difficult for me to write. It might be the most difficult thing I've ever written in my life.

When I shared our announcement I briefly mentioned that we had been pregnant with twins and unfortunately lost our sweet baby B. Today I want to go into more detail about this pregnancy and the experience we've had. I have never felt as alone as I have while going through this. If I can write this and help someone else going through this someday and help them feel less alone, that's what I'll do. 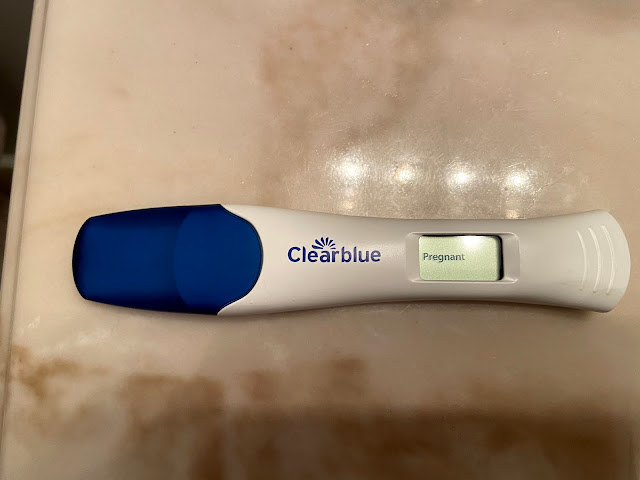 The week of Christmas we found out we were pregnant. We had been struggling with infertility for 18 months at that point.  We were skeptical at every positive pregnancy test. I remember telling Tim I was pretty sure I was pregnant and him telling me he wasn't going to get too excited just in case it wasn't true.
Once I had taken what seemed like a million pregnancy tests and we were sure that I actually had managed to get pregnant we started to get excited and I scheduled my first appointments.
I should also mention that the month we got pregnant was my first month on Clomid. We knew that a possibility with Clomid was the increased likelihood of twins. My papa is a fraternal twin and I knew that in my family it was possible that I could end up with twins naturally. I have always been obsessed with the idea of being a twin (I blame the Mary-Kate and Ashley Olsen era) and having twins seemed like a dream to me. Yes, a lot more work than just having one baby...but it was something I hoped for. 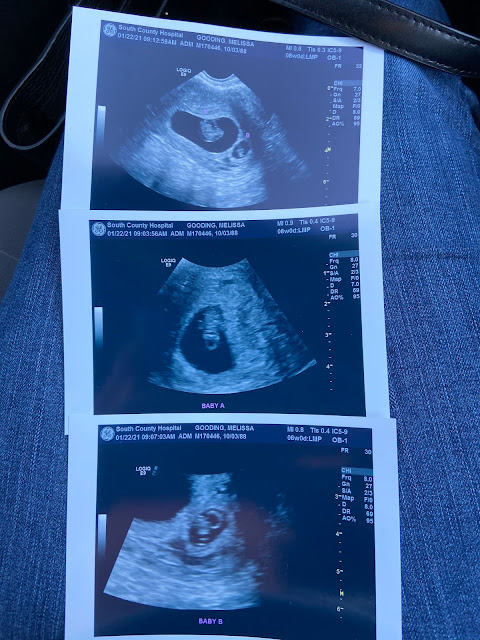 Due to COVID, Tim wasn't allowed into my ultrasound. As I laid on the table I wished for a healthy baby, just one healthy baby but two would be great too. The ultrasound tech giggled and I knew in that instant that I had my twins. I blurted out "Is it twins?!!?" and she confirmed that yes there were two babies in there, each in their own sac. Baby A was measuring four days ahead of Baby B, but she assured me that was completely normal. She printed out the ultrasound pictures and I literally skipped out to the car where Tim was waiting for me.
Afterwards, Tim said he could just see that I was happy and he thought it was just the relief that we had one healthy baby. When I handed him the pictures I said "Please don't kill me" and laughed. I explained that it was twins and all my obsessing much have worked and I manifested twins. I would often in the following weeks refer to it as manifested and now I regret that. I think Tim was in a slight state of shock but he quickly became excited as well. Two babies!
The date of our first ultrasound was January 22nd. Being 8 weeks pregnant, not everyone knew about the pregnancy but we had told our parents, siblings, and best friends that we were expecting. Of course everyone was anxious to hear about our ultrasound so we told everyone that we were expecting twins. Everyone was thrilled and we expressed our nervousness for having not just one but two babies. We talked about it at length. We discussed needing a bigger house, adding an addition, the extra cost-- basically all monetary concerns but we were so excited to welcome these two little babies into our family.
Then I went to my 10 week appointment.
On Thursday February 4th I had my 10 week appointment with my OBGYN. She used the in-room doppler and could only find one heartbeat. I had the option of sitting around in the waiting room hoping for an ultrasound appointment to open up or going home and waiting for a call. I chose to go home and unfortunately was not given an appointment until the following Monday February 8th.
Those four days were absolute hell. I just held my stomach and cried. I prayed that both babies would be healthy. I begged and pleaded saying I would give anything to have two healthy babies. No amount of hoping, praying or wishing would matter. 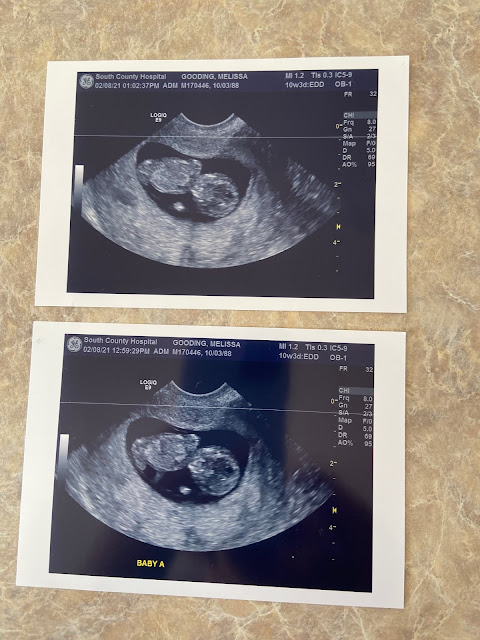 On Monday I laid on the table as not one, but two ultrasound techs looked at Baby B and couldn't find a heartbeat. Baby A was healthy and developing normally but Baby B had stopped growing a few days after my first ultrasound. If you've ever had a miscarriage I imagine this feeling is similar. You wonder how you didn't know that something was wrong. You feel like a failure as a mother for having no idea that your baby wasn't alive anymore. I tried to hold it in but I just laid on the table and sobbed and sobbed. I have never felt more pain in my life.
Tim was thankfully outside in the car (they again wouldn't let him inside due to COVID). He knew the second he saw me and I just collapsed into him in tears. I couldn't have asked for a more amazing husband, best friend and partner in life. He just held me while I cried.
The aftermath wasn't fun. I had to tell everyone we had told about the twins two weeks prior that now we were only having one baby. I cried as I told Baby A that I was so sorry I couldn't give them their sibling and I cried as I told Baby B how much I wished they had been okay. I blamed myself, I think everyone does. Most people were very supportive and just told me they were there for me whatever I needed. There were a few who made the "wrong" comments and said it was for the best and there must've been something wrong with Baby B. If you EVER know someone who is miscarrying a baby please never never never make a comment like this. It does not help, it does not make the mother feel better, it only makes you seem like an asshole.
Now, I've never had a singleton miscarriage so I can't say for sure but I do believe they feel different. From everything I've read from people who have had both a singleton miscarriage and vanishing twin the difference is that when the miscarriage happens, the pregnancy is over. You are able to move on, getting pregnant again, or not. You can mourn the baby you lost. I was expected to feel thankful for the one baby I still had inside me and almost forget about Baby B. The pregnancy never ends, their is no closure and that has been the hardest part so far. Not one day goes by that I don't think about Baby B and how I wish they were still growing.
I was angry and sad and devastated. It was hard for me to celebrate being pregnant for awhile. It was hard for me to make the announcement. It was hard to hear congratulations from people when I didn't want to be congratulated. It seemed like people were forgetting that it was supposed to be two babies, not just one. I was SO angry. I listened to a lot of Taylor Swift. this is me trying and evermore were two songs I listened to on repeat. 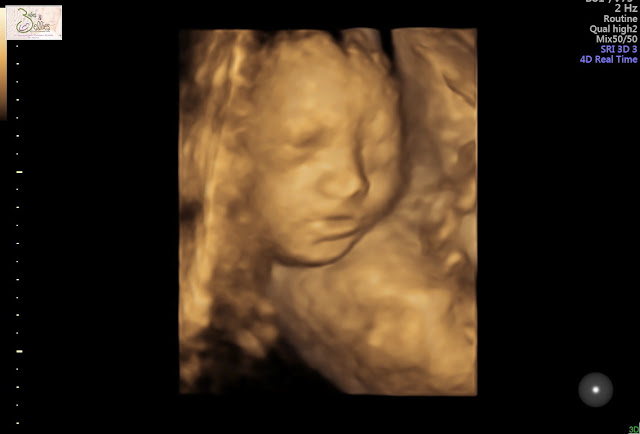 I still feel devastated about our loss. I often feel guilty and depressed. This pregnancy has been hard.
If you don't know what happens with vanishing twin it's not like a traditional miscarriage, at least not in the first trimester. The second baby ends up getting reabsorbed back into the mom or other baby. Baby B will always be a part of me and Ellie. We will always carry her with us.
Now we don't know for sure, but since the blood work determined that Ellie was a girl there is a good chance that Baby B was a girl as well. Tim and I both feel that she was a girl. We had names picked out if we had twin girls, Ellie and Olivia. We chose to name our surviving baby Ellie Olivia, but also know that Olivia would have been the name of her sister. We did this to honor her and also acknowledge that she is a part of our family and always will be.
Going forward I'm not sure what will happen. Will I feel like I'm missing a baby at the time of birth? Will I always feel that there is a presence missing in our family? Will I look at other twins and burst into tears because my girl should have a twin beside her as well? These are all things I read other vanishing twin moms experienced. I can't predict the future but I am an extremely sensitive person and know that this will always affect me.
I have heard from other women who have experienced miscarriages saying that it will all make sense later when I have future kids I will see my family is the way it is supposed to be. I don't think this really works for vanishing twin though because she always would've been able to be here. It's not as if I lost a baby and then got pregnant with another one. They were able to coexist. Everyones experience is different, I'm not saying that one is more or less valid than the other, just that it's comparing apples to oranges. I don't think you can compare miscarriage to vanishing twin, they are just too different.
If anyone out there is going through vanishing twin, please feel free to reach out to me. My email is on the right side of my homepage and you can also message me on Instagram @balancingonmytoes. I have felt horribly alone throughout this entire process and it's hard to talk to people who haven't experienced it or people who have gone through something different and feel it's the same. It's just not. Living with a pregnancy that causes you joy and pain simultaneously is extremely exhausting, just know you are not alone.
Again, please reach out if you need me and I hope this helps someone, somewhere.

Many of these articles helped me when I first found out. There weren't many people who wrote about this experience but knowing that there were a few people who felt the same things as me gave me hope and I hope it does the same for you.
Posted by Melissa at 3:00 AM